On Tuesday, Apple debuted its 2020 lineup of new smartphones: the iPhone 12, the iPhone 12 Mini, the iPhone 12 Pro, and the iPhone 12 Pro Max.
The big new feature for 2020 is 5G connectivity, which is a new cellular standard built into each of the new iPhones.
“5G will bring a new level of performance for downloads and uploads, higher quality video streaming, more responsive gaming, real time interactivity, and so much more,” Apple CEO Tim Cook said during a streamed video presentation from Apple headquarters.
But with Apple’s recent ban of the online multiplayer blockbuster “Fortnite,” and its ongoing ban on game streaming services like Xbox Game Pass and Google Stadia, the key feature of the latest iPhones will go largely unused.
Visit Business Insider’s homepage for more stories.

Regardless of which new iPhone you get, there’s one standard that’s brand new across all four: 5G cellular connectivity.

As Apple CEO Tim Cook described it during a video presentation on Tuesday afternoon, 5G on iPhone, “will bring a new level of performance for downloads and uploads, higher quality video streaming, more responsive gaming, real time interactivity, and so much more.” It’s this year’s Big New iPhone Feature.

So, what does 5G actually do?

It improves download and upload speeds for anyone with the latest iPhones, so long as you’re in a place with 5G wireless signals. In practice, it means movies and TV shows will load a little faster, directions can be found a bit quicker, and, generally speaking, anything that depends on your phone’s cell data will be a bit more speedy than it was in the past.

More than anything else, there’s one aspect of iPhone use that could be dramatically improved with 5G connectivity: gaming.

Not only does 5G enable faster game downloads, it also enables smoother, lower latency online multiplayer gaming — a staple of modern smartphone gaming, largely due to games like “Minecraft,” “Roblox,” and “Fortnite.”

But “Fortnite” is banned from the iPhone due to an ongoing legal spat between “Fortnite” maker Epic Games and Apple, so anyone buying the latest iPhones won’t be able to take advantage of what 5G connectivity can do for their game.

As Verizon Communications CEO Hans Vestberg said on stage during Apple’s iPhone 12 event, 5G connectivity on the new iPhones, “provides you with super low latency, so experiences like multiplayer gaming feel like they’re happening in near real-time” — a feature that would be especially meaningful in a game like “Fortnite,” with dozens of players interacting in real time in a shared online space.

Unfortunately, as Epic’s legal issues with Apple are ongoing, it’s unlikely that “Fortnite” will return to the iPhone App Store anytime soon. 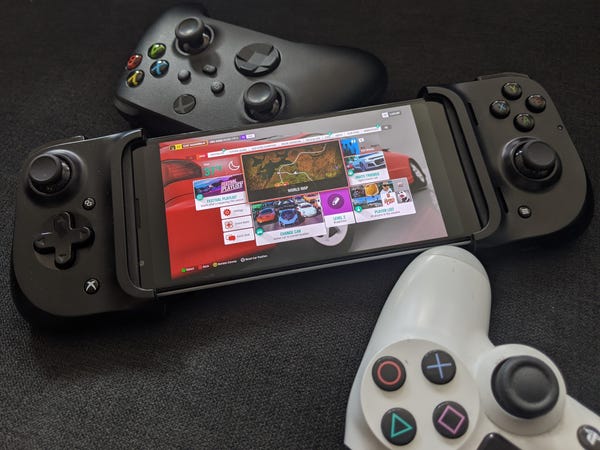 Xbox Game Pass running on a Google Pixel 3A XL with a Razer Kishi controller attached.

The reason, an Apple spokesperson said in August, is because Apple isn’t able to review each game that’s available through Game Pass.

“The App Store was created to be a safe and trusted place for customers to discover and download apps, and a great business opportunity for all developers,” an Apple spokesperson told Business Insider. “Before they go on our store, all apps are reviewed against the same set of guidelines that are intended to protect customers and provide a fair and level playing field to developers.”

Because Microsoft isn’t submitting each game on its streaming service to Apple’s review process, the app that enables access to those games is being blocked from publishing.

Microsoft’s service operates like Netflix or Spotify, with subscribers getting access to a built-in library. As such, submitting each game in that library to Apple’s review process is prohibitively time consuming, Microsoft argues. It would also require each of those games to enable in-app purchases through Apple’s payment systems, and each game to be ranked on the App Store charts, among other features. Each developer would need a paid Apple developer account.

Since Apple allows services like Netflix and Spotify without reviewing every piece of content, why not allow a similar service for gaming? The difference boils down to the medium, according to Apple: Games are interactive, unlike music and film, and there are consumer expectations baked into the App Store related to gaming.

Without the ability to make in-app payments through Apple, for instance, and without App Store ratings, games in the Xbox Game Pass service are bucking consumer expectations for App Store gaming, Apple argues.

Microsoft could circumvent these regulations, Xbox leader Phil Spencer told employees recently, through a browser-based solution on iOS. “We absolutely will end up on iOS with Game Pass,” he said. The company has also pushed back publicly on Apple’s game streaming blockade.

“Apple stands alone as the only general purpose platform to deny consumers from cloud gaming and game subscription services like Xbox Game Pass,” a Microsoft representative said in a statement in August. “It consistently treats gaming apps differently, applying more lenient rules to non-gaming apps even when they include interactive content.”

Despite the new iPhone’s focus on faster-than-ever cellular data speeds, the very apps that would most take advantage of that speed aren’t allowed on the App Store. Without a change of heart — and policy — Apple’s latest line of iPhones are missing a critical step toward the future of gaming.

Got a tip? Contact Business Insider senior correspondent Ben Gilbert via email (bgilbert@businessinsider.com), or Twitter DM (@realbengilbert). We can keep sources anonymous. Use a non-work device to reach out. PR pitches by email only, please.

BIM provider gets a boost from Fortnite developer

Mobile, Apex Legends Is Stepping Into The Mobile Gaming War To Compete With PUBG Mobile