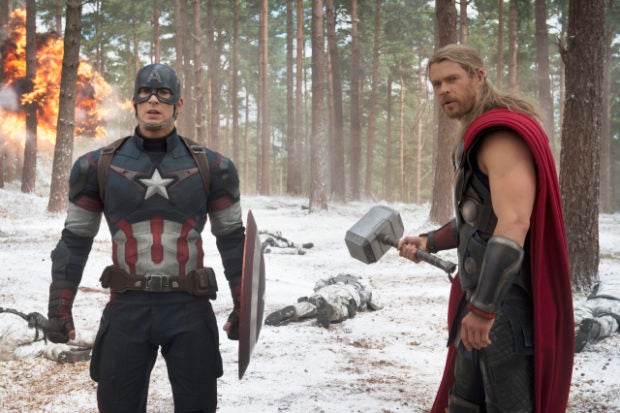 Datamining discoveries relating to the latest “Fortnite” update indicate that another comic book crossover could be on its way this week.

Chapter 2 season 3 of the popular console, computer and mobile game-slash-online hangout space already accommodates DC Comics’ Aquaman and it looks like Marvel’s Captain America could be joining the fun in v13.20.

HYPEX asked whether Item Shop notes indicating that “a hero arrives” and “a mighty hero is coming” on July 4 might refer to Captain America.

Others picked up on a discovery by Lucas7yoshi, noting that a Dad Bod Jonesy costume looked a lot like Chris Hemsworth’s Fat Thor from “Avengers: Endgame”: The hair, unkempt beard, wraparound sunnies, exposed gut and long knitted cardigan.

The blockbuster ensemble had referenced “Fortnite” as an aspect of Thor’s story in the time between “Avengers: Infinity War” and “Avengers: Endgame”, while “Fortnite” has previously hosted events promoting both films.

Other “Fortnite” superhero movie crossovers have resulted in character costumes or skins styled after Batman, Catwoman and Harley Quinn from the DC Comics side, and Cable, Psylocke, Black Widow, Domino and Star Lord from Marvel’s stable.

Meanwhile, “Fortnite” developer Epic Games has confirmed that it will be bringing back Limited Time Mode (LTM) events until the end of season 3 on Aug. 27.

These LTMs provide a twist on the usual last-person-standing or last-small-team-standing dynamic of “Fortnite” Battle Royale, and Epic is promising a mix of old favorites and new formulations — plus the obligatory selection of paid-for virtual outfits — over the next eight weeks of Summer Splash mayhem. RGA

Gamer raises nearly $1 million for charity in under 5 hours

Don’t miss out on the latest news and information.

Have You Found Fortnite’s Secret Golden Mushroom Yet?

7 Tips to Help You Become a Fortnite Master – GameSpew

PUBG Mobile to get Erangel 2.0 and a collaboration with The Walking Dead » TalkEsport

Trump ban of Tencent Holdings could affect Fortnite, League of Legends and other games