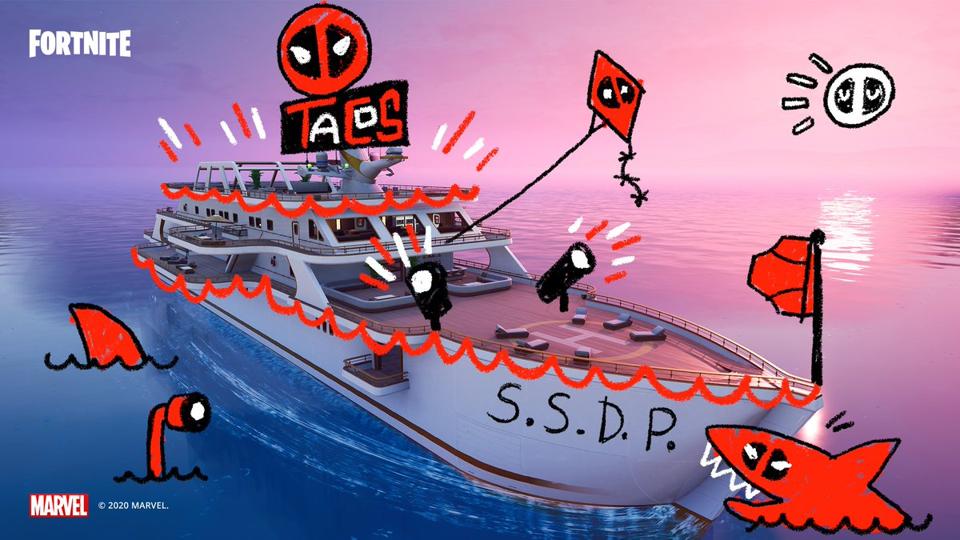 Deadpool has been skulking around Fortnite for a while now, hiding out in his office/bathroom, playing video games, hiding weird objects around the HQ menu. Ever since the beginning of the season we’ve been doing Deadpool challenges as a sort of side plot to the main secret agent theme of the season, and now he’s finally arriving in all the style that he’s accustomed to. The skin will be made available after finishing tomorrow’s challenges, and Deadpool has been tweeting about his imminent arrival in the game:

Tomorrow after the skin arrives we can expect all sorts of shenanigans that dataminers have known about since this weeks’ patch. As we can see above, he’s going to takeover the Yacht. We’re also going to get a Deadpool battle bus with accompanying music, as well as some other stuff around the map, I’m sure. This is a whole lot more fanfare than any other challenge skin has gotten in the game’s history, but then again, no other challenge skin has been licensed.

My real question is whether or not Deadpool will interact with the secret agent storyline. You could argue that he’s already doing so by taking over the yacht, but we also know that things are moving ahead on that front soon enough: you can already see the beginnings of what’s going to be a doomsday device forming in the water around the agency, and a doomsday device could be the sort of thing that Deadpool would get into.

Regardless, Deadpool goes to show the cozy relationship that Fortnite has enjoyed with Disney ever since its very first licensed event with Thanos back in year 1. We’ve now seen Marvel skins, two Marvel events, a massive star Wars event, and now a Deadpool challenge skin for good measure. Star Wars: The Rise of Skywalker even somewhat inexplicably decided to hide one of its major plot developments in the Star Wars live event, though that is definitely taking the relationship too far.

We’ll see what happens in the coming weeks. For right now, expect to see an absolute ton of Deadpool skins running around the island in the next few days.

How to watch Fortnite’s exclusive Star Wars: The Rise of Skywalker clip this Saturday