Engine Behind ‘Fortnite’ Is Harnessed to Power Business Technology

Companies are harnessing the software behind hit videogame “Fortnite” to do everything from designing cars to discovering drugs, tapping into its realistic imaging and its ability to manipulate 3-D designs.

Gaming engines, the software development environment for creating videogames, take advantage of complex calculations done by hardware such as graphics chips to generate photorealistic 3-D visualization and modeling as well as physics simulations.

When combined with virtual-reality headsets, gaming engines let designers and engineers create products, visualize elaborate designs and even build employee training programs. For some, playing with virtual objects is a more fun and engaging way to get a job done than using a keyboard, a mouse and two-dimensional screens.

Companies are looking to solve problems faster and in more creative ways with recent technology advances, said Brett Bibby, vice president of engineering at Unity, which is working with hundreds of firms in sectors including architecture and construction to develop applications using its technology.

A basic version of the Unity software for personal use—or use by organizations whose funding doesn’t exceed $100,000 a year—is free, but Unity charges for versions that come with support and other services.

About 1,000 PC games, 200 console games and more than 20,000 mobile games have been made with gaming engines, said Michael Pachter, managing director for equity research at Wedbush Securities Inc. To license the engines for use in another videogame, companies typically charge $50,000 to $250,000 per game, or take a cut of sales, he said. 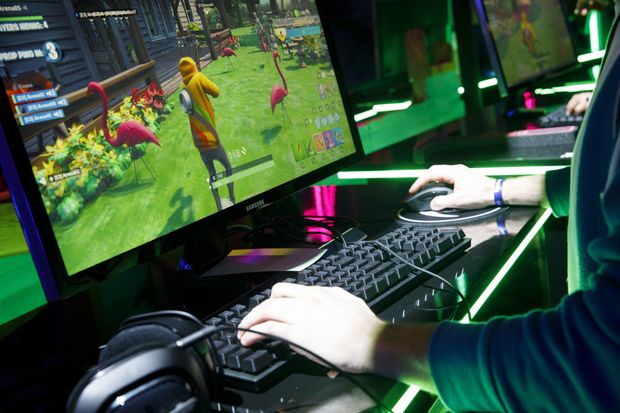 An attendee playing Fortnite at the Electronic Entertainment Expo, known as E3, in Los Angeles on Tuesday.

Mr. Pachter estimated Unity and Epic made roughly $200 million each annually from the engines. By comparison, Epic has made $3.5 billion annually from Fortnite since its 2017 release, he estimated. An Epic spokeswoman declined to share revenue numbers for its products.

The use of engines illustrate the videogame industry’s outsize impact on technology. Graphics processing units originally used in games are now powering artificial-intelligence systems. Technology derived from Microsoft Corp. Xbox is used to secure Internet of Things devices from refrigerators to thermostats.

Designers at McLaren Automotive, a division of U.K.-based McLaren Group, have been using the Unreal Engine for more than a year to create, evaluate and fine-tune digital car models. The process now takes hours or days, a switch from using drawings and modeling clay, which sometimes took a month. McLaren Automotive also uses tools from companies including

for designs and calculations.

“It’s really paying dividends because it is dramatically speeding up the process. A designer can put on a VR headset, sketch something directly into 3-D, build a volume model, spin it around, and fast track to 3-D,” said Mark Roberts, head of design operations at McLaren Automotive.

The company plans to release 18 new cars from 2018 to 2025, all involving the use of gaming engines.

PLC, gaming engines are powering a more efficient drug-discovery process. The company uses the engines to discover molecules that help fight diseases like Alzheimer’s, Parkinson’s and ulcerative colitis, then licenses the resulting drugs to customers.

“Normally you are guessing what a new molecule you make will look like. Now you can see what it looks like and know it is the right shape. Or you can tweak it a little bit and make another molecule that’s very similar but it is slightly better,” said Clive Dix, chief executive of C4X.

Write to Agam Shah at agam.shah@wsj.com

here's where to find the new Fortnite chip on the map