In the nine years since Ernest Cline published his geek fantasia Ready Player One, video games evolved into something more than a distraction. In many ways, the industry took its cues from the world found inside Cline’s book. Video games became more than, well, games. They became a virtual world where you could hang out with friends and catch a movie — or shoot aliens.

With a sequel, Ready Player Two officially coming in November 2020, how will the author grapple with a world that’s caught up to his lofty ideas. Or is Cline’s story not backward compatible?

News broke on Wednesday that Ready Player Two, Cline’s sequel to his 2011 sci-fi novel, will be released on November 24, 2020. There is no plot synopsis available, but the first book took place in 2045. Cline envisioned a future where humanity withdraws into the OASIS, a virtual reality game created by the eccentric James Halliday. Upon his death, Halliday leaves three hidden Easter eggs that would reward his vast fortune to the first player to find it. Years go by until Wade Watts, a poor teenager, finds the first Easter egg and kicks off a worldwide race to find them all.

Ready Player One initially earned praise for its celebration to generational nostalgia; NPR called it a “winning, geeked-out page turner.” However, reception grew colder over time, as the book’s overuse of pop culture references, tokenizing women and people of color, having a female lead be a trophy to be won, and a weak protagonist (“Extremely annoying,” wrote The Hollywood Reporter) turned the internet against a book engineered for it. Leading up to the 2018 movie directed by Steven Spielberg, now-deleted tweets went viral that encapsulated the book’s literary shortcomings, sacrificing prose for ’80s-era proper nouns. (Here’s a more recent dunk.)

In 2018, a feature film adaptation of Ernest Cline’s book, directed by Steven Spielberg, was released in theaters.Amblin/Warner Bros/Kobal/Shutterstock

But video game developers took a lot from Ready Player One. In April 2020, The Washington Post explored how some of the biggest games, namely Fortnite, are not aiming to be weekend past-times but a thriving digital second space with their own economies. The concept is called the “Metaverse,” just like in Cline’s book. The Post cited former Amazon Studios executive Matthew Ball, who wrote in an essay the Metaverse is the new benchmark for gaming in the next decade. An earlier story from Wired described the Metaverse found in Ready Player One “just beyond our grasp.”

“To this end, the Metaverse has become the newest macro-goal for many of the world’s tech giants,” wrote Ball. “As I outlined in February of 2019, it is the express goal of Epic Games, maker of the Unreal Engine and Fortnite.”

Ball also named Facebook’s acquisition of Oculus and its Horzion virtual space as further visible examples of the tech industry’s pursuit: “The tens of billions that will be spent on cloud gaming over the next decade, too, is based on the belief that such technologies will underpin our online-offline future.”

Fortnite passively resembles the OASIS, despite some obvious technological limitations:

In Cline’s book, the OASIS is an open world sandbox where players can visit different worlds that resemble popular movies and shows. Fortnite has featured multiple branded collaborations with Star Wars, Marvel, and DC Comics. In the OASIS, players are able to customize their avatars. There’s limited customization in Fortnite but premium character “skins” were, not long ago, a kind of status symbol among younger players.In Cline’s book, the OASIS evolved out of a game and into a utility where children receive public education after climate change and overpopulation make going outside a non-option. Amidst the Covid-19 pandemic, Fortnite has experimented with holding movie screenings and concerts, all to varying degrees of success. 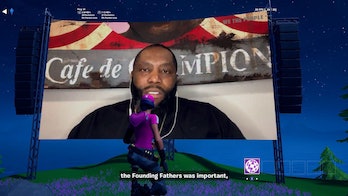 On July 4, 2020, ‘Fortnite’ hosted guest speakers including rapper Killer Mike (pictured) for a panel, “We the People” that aimed to advance the dialogue of race and racism in America. Neilson Barnard/Getty Images Entertainment/Getty Images

It is possible and plausible that the video game industry would have arrived at the Metaverse on its own, without Ernest Cline. Before Ready Player One, there were already millions immersed in World of Warcraft and, to a lesser degree, Second Life. Millions (later billions) watch into esports. The personality-driven mini-empires found on Twitch (another concept present in Cline’s OASIS) were first drafted on YouTube and Twitch forerunner Justin.tv.

All this and more were already happening before Cline’s book. But upon its publication in 2011, Ready Player One was a nexus of said things happening. It presented a functional (if fictional) blueprint of the Metaverse. Though we have no concrete idea of what lies ahead in Ready Player Two, it is misguided to dismiss Ready Player One and its significant role in the last decade. If we don’t anticipate it, Ready Player Two just may play us again.

Ready Player Two will be released on November 24.

How to Open Gate A in Ritual's Fortnite Hub

Fortnite Fortbyte 83: Found in a Rock Garden near the Coast