Fortnite has just announced in a tweet that gamers will be able to mute licensed emote audio in the upcoming 12.00 update. Content creators were overjoyed with this change, responding positively to the tweet. Streamer DrLupo responded with “Thank You” and Fortnite leaker Lucas7Yoshi wrote that this is “actually [a] really good feature.”

PC Players: In the 12.00 update, we’ve added the ability to mute Licensed Emote Audio. This option is available in the game’s Audio settings. pic.twitter.com/UHGYAlXKgH

This seemingly minor change will have a massive impact on the battle royale’s content creation community, which in the past has dealt with copyright claims from music companies on YouTube. The video hosting platform that generated $15 billion in revenue for Google in 2019 has a fairly strict policy when it comes to playing copyrighted music on the platform. Companies like Universal Music Group and Warner Music Group have automated algorithms and employees that comb through the site searching for instances of copyrighted music. These companies can levy a “Copyright ID” claim which can potentially result in a violating video being taken down. Song clips under 10 seconds are legally allowed but are often flagged by automated tools regardless. 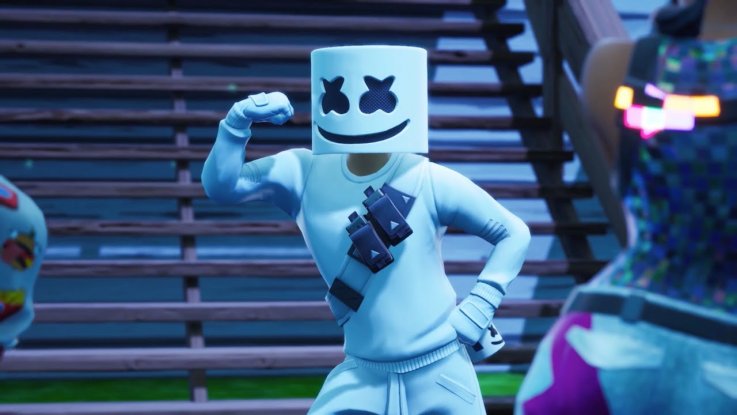 Videos and streams from the Marshmello concert event in February 2019 received a large amount of attention and buzz. Epic Games announced that content creators wouldn’t get strikes for posting videos of the event, but some still reported claims on their videos.

We’ve worked with @marshmellomusic’s team to ensure you won’t receive copyright strikes for posting the event. This means you will not be able to monetize your video content, but you will be able to keep your content posted on your channel.

Earlier this week, Fortnite added an emote featuring Rick Astley’s classic meme hit “Never Gonna Give You Up.” Builders across the globe spammed the new cosmetic in their games, much to the chagrin of the content creators they were playing against. Some smaller channels tweeted that they received claims, but most just worried about a potential issue. With this new feature allowing users to turn off content that is copyrighted, streamers or YouTubers don’t have to fear the wrath of automated copyright bots at all.

Fortnite content creators are a huge part of the game’s ecosystem, with its developers at Epic Games using creator codes to share a small portion of revenue when V-Bucks are purchased or used. This change is just another example of Epic Games paying attention to its content creation community.

In order to mute copyrighted music once the new patch goes live, you’ll need to head over to your settings and click on the “Licensed Emote Audio” option. You can choose to mute all copyright music (outside of concerts or event playlists) or just mute other players in your matches.

How do you feel about this audio change in Fortnite? Does it just not affect you? Tell us in the comments section.

Fortnite’s next season needs to tell a good story

Dealing damage with lumps of coal for Fortnite Winterfest challenge

The latest modern art installation is inside Fortnite

Fortnite N location: where to find the hidden N in Fortnite