Home > News > Fortnite fans have a theory about Midas

Fortnite fans have a theory about Midas

Fortnite fans have a theory about Midas and the new Oro skin.

The plotline of Fortnite Chapter 2 has been relatively difficult to follow. We had the Alter vs. Ego battle last season of which fans tried to make sense, but not much came out of that.

In Season 2, Epic seems to have repurposed the factions as Ghost and Shadow. Similar to the last season, there are two opposing sides with different variants for each Battle Pass skin.

The overarching plot of the new Chapter is still a mystery, although we’re getting a few hints. Eagle-eyed viewers spotted the Chaos Agent in the background of the Slurp Legends trailer, meaning that he’s still a player in the Fortnite lore.

These bits and pieces have led to some theories about the current storyline. One of these small details involves Midas and the new Oro skin.

It didn’t take players long to notice that Oro and Midas both have a scar covering their right eyes. Before Oro even hit the game, fans were speculating that these two characters were one and the same.

When Oro released, however, fans looked at the set names for each character. Oro is part of the ‘Midas’ Revenge’ set and Midas is part of the ‘Golden Ghost’ set. This theory from Reddit user u/heckingimmortal has Midas as a ghost and Oro as the reanimated skeleton of Midas. 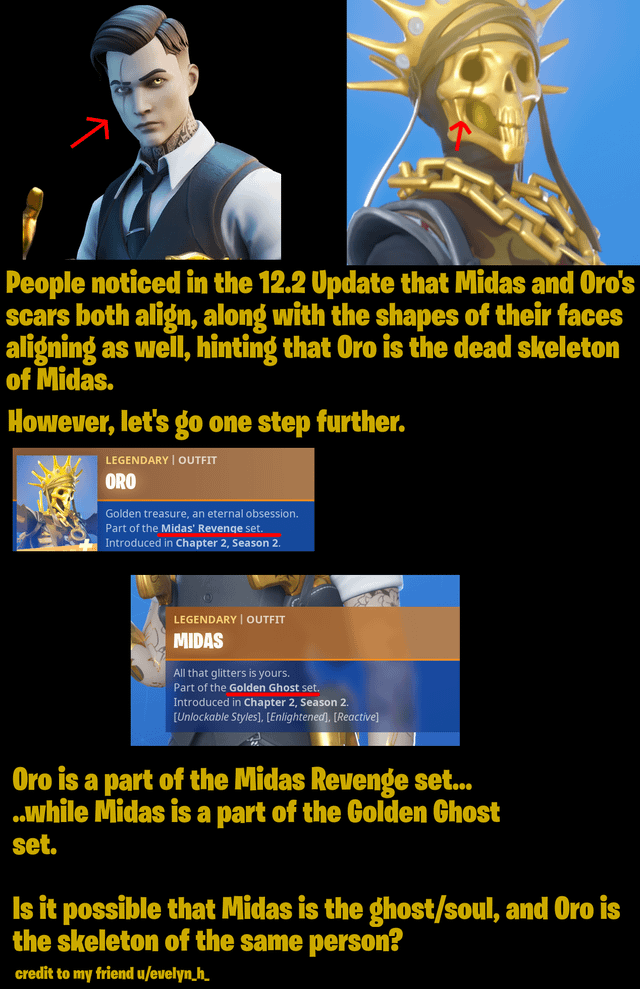 This is an interesting theory, and the set names seem to indicate that there’s a deeper connection between the two.

Unfortunately, this might be one of those theories that, while true, never have an impact on the future of the Fortnite lore. Epic is still developing the Chapter 2 storyline – it wasn’t until Season 3 that things started to pop-off in Chapter 1.

We’ll wait and see what happens, but this theory has some strong evidence – even if it’s never confirmed.

Fortnite Season 4 Week 14 Challenge Guide: How to Boogie Before Oblivion

Upcoming Fortnite collaboration with Disney Plus has been datamined