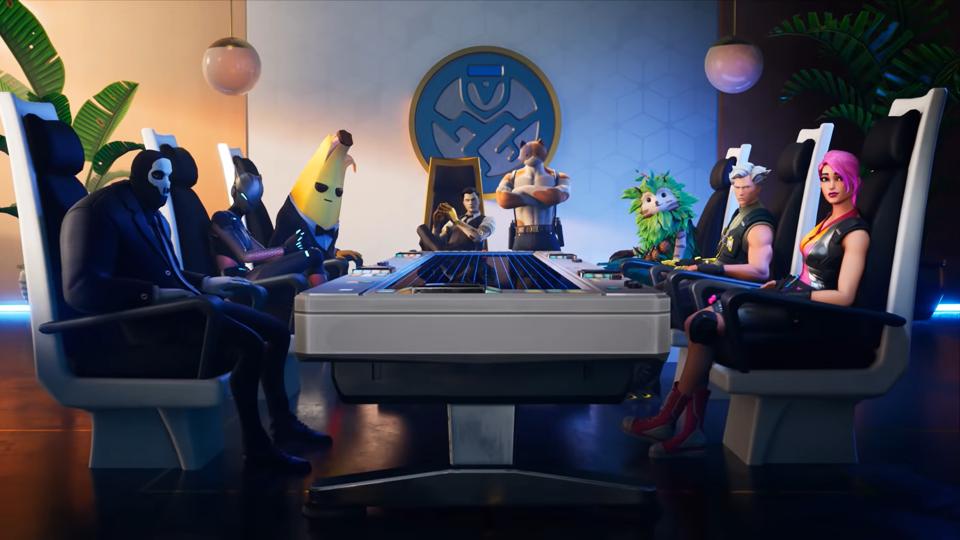 The new seasons’s cinematic trailer—which you can watch below—is all about spies. Even Peely gets a swanky tux. This new cabal of spies is led by the mysterious Midas—no wonder things have been turning gold on the game’s map.

The trailer itself is great. The soundtrack sounds like it’s straight out of a James Bond movie, all brass and melodrama.

The various spy characters are called to action throughout the trailer and end up meeting at Midas’s high-tech table where we find him petting a rather large cat.

In Chapter 2, Season 2 you’ll be able to customize your Battle Pass skins, choosing to go with special Ghost or Shadow variants. I guess these are the two groups of spies vying for control of the island. It also looks like those torpedoes might be the new vehicles. My game is still updating so I’m uncovering all this as I go. Stay tuned….

Fortnite Chapter 2, Season 2 is live now though you’ll need to install the rather large update. Keep an eye on Forbes Games for coverage, guides and more.

Ninja and SypherPK explain why they don't focus on competitive Fortnite

If 'Fortnite Fatigue' Is Fake, Epic Games Picked a Dumb Way to Prove It

Notes from the 560: To Fortnite and beyond

Where is the Friendship Monument In Fortnite

Ninja gets instant karma for being “too cocky” in Fortnite

Fortnite Doom’s Domain Vault location and how to open it with Doctor Doom’s Keycard • Eurogamer.net