Fortnite Season 11 is just days away, and one of its biggest surprises has apparently been leaked by sources at the Italian App Store. While the image has since been removed on official pages, the Fortnite Leaks Twitter account captured presumed key art of the new map for the next Battle Pass. Fortnite Chapter 2 is almost here, but are you ready?

The leak, posted Friday morning by the source Twitter account, shows an image of Fortnite characters overlooking an area that’s very different from the traditional Fortnite Island. There’s a winding river between points of interest, boats piloting through the water and what appears to be a lighthouse in the distance. While we’d stop short of saying the new map is nautical in nature, it’s certainly got a lot more variety in it than hardcore Battle Royale fans may be used to.

Looks like Apple has leaked a promotional image for Season 11 on the Italian Apple Store.

From the looks of it, weâre getting a new map. pic.twitter.com/2naPbsYvDA

For those who’ve been following Fortnite Season 11 developments closely, the idea of adding a new map alongside the next Battle Pass is hardly a surprise. Considering the entirety of Fortnite Season X has revolved around nostalgia for the classic map, it makes sense that the current theme would act as a fitting send off for the original play space. It’s also worth noting that the Week 10 Loading Screen, called Last Stop, features Jonesy and his pals waving goodbye to the beloved Battle Bus. Even disregarding prior leaks that suggest many new named locations are on the way, the in-game evidence of a new map for Fortnite Season 11 is downright overwhelming. 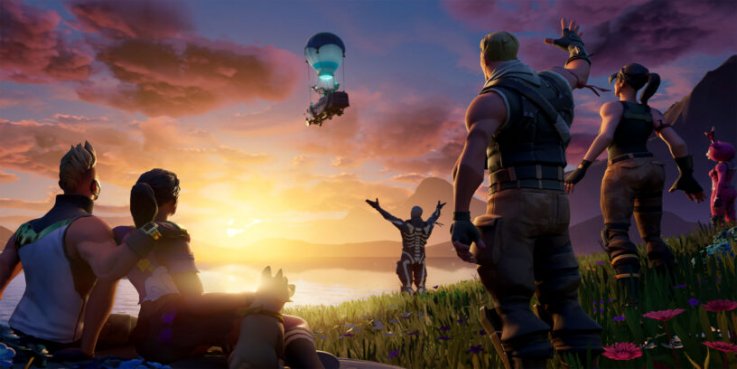 ‘Fortnite’ Season 11 leaks suggest players will be leaving the old map for a new one. If so, this Week 10 Loading Screen makes sense. ‘Fortnite’ is available on PS4, Xbox One, Switch, PC and mobile.
Epic Games

With current presumptions and leaks in mind, then, the only thing that stands between Fortnite fans and the new Season 11 map is the “The End” live event set to take place at 2 p.m. EDT October 13. It’s believed during that time fans will be forced off the old Island and pushed into the new area. As players embark on Chapter 2, questions remain over what’s next for the Visitor’s evolving story. Will we see him again, and what are he and his mysterious seven cohorts trying to accomplish? It may be awhile before we know the true story behind this new map, but there’s almost no denying we’ll be exploring it very soon.

Fortnite is available now on PS4, Xbox One, Switch, PC and mobile. Fortnite Season 11 is expected to begin after the live event on October 13.

What are your thoughts on the new map for Fortnite Season 11? Does this leaked image get you excited for the next Battle Pass? Tell us in the comments section!

Crossplay: An Armistice for the Console Wars

What is in the Fortnite Item Shop today? Leviathan is back on May 11

PUBG How to Use Canted Sights For Xbox, PS4, and PC