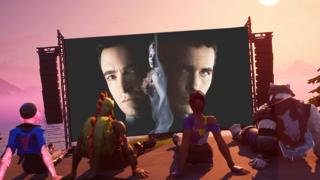 Later this Friday, Fortnite players will stow away their guns and kick back for a movie screening.

Three of Christopher Nolan’s biggest films – The Dark Knight, Inception, and The Prestige – will be shown in the game’s Party Royale mode.

What you’ll see will depend on what country you’re in.

But why would anyone want to watch a film inside a video game?

“The real world is unbeatable, in my opinion,” says Darshan Shankar, the founder of Bigscreen VR – a company that lets users watch films together in cinemas created within virtual reality.

“Things like Fortnite and Bigscreen don’t necessarily replace the awesomeness of a real world cinema,” he says, instead it’s about being “able to watch things together with people”.

Browser extensions for Netflix and the BBC’s iPlayer also exist for those wanting to watch films and TV shows together while apart, so they can text and chat about the action as it unfolds.

But Fortnite – like Bigscreen – has the potential to take this to another level by giving users a sense of being in the same space.

It’s not the first time Fortnite has tried something like this. It debuted a clip from the last Star Wars movie last year, and was also first to show a trailer for Nolan’s next film, Tenet, in May.

Spy action film Tenet was supposed to come to cinemas on 17 July and help bring people back to the multiplex post-lockdown. But it has been repeatedly delayed, with 12 August given as its latest release date.

The Oscar-nominated director of Shakespeare in Love, The Best Exotic Marigold Hotel and Miss Sloane took time out from editing his latest movie to give the BBC his view on Fortnite’s Movie Nite phenomenon

“Speaking as a filmmaker, I wouldn’t object to a film I had made finding an opening in an unlikely setting, assuming it was in the later part of the film’s release cycle.

“That said, Christopher Nolan’s work might seem a better fit than mine to the Fortnite community!

“I think that film distribution is bound to evolve, particularly in the aftermath of the Covid cataclysm, and provided that the film can be seen initially in the setting the director intended, it seems churlish to object to attempts to bring any work to a wider audience.”

Fortnite has already hosted interactive concerts, including a major event by Travis Scott that saw players teleport around the map and into outer space. Nearly 28 million people took part, and many more watched recordings on YouTube and elsewhere.

It’s all part of what the media is calling Fortnite’s “metaverse” – a move to turning the game into a place to hang out, rather than just play it the way it was designed.

Some argue that Fortnite has essentially become its own social network.

Friday’s film night is set to be similar to the Tenet trailer screening, in that players can move around, dance and “emote” as well as look at the screen while it plays.

Secret Cinema has proved there’s huge appeal in hosting events where the action occurs both on and off-screen simultaneously in its immersive cinema experiences.

Visitors watched a DeLorean racing round the audience at its Back to the Future event, and the crowd twirling in time at its Dirty Dancing experience.

Max Alexander, its chief executive, says congregating to watch a movie has been important since “the grand old days of cinema”.

There’s some “richness that’s missed” without other people, he says.

“I think Fortnite’s really interesting. The avatars are really viewed like extensions of the player.”

And like Secret Cinema itself, he says there is the opportunity to “have a relationship with everybody else – not just the people you’ve come with”.

At Secret Cinema, the event is the main draw – such as in their production for Bond film Casino Royale

‘You want your art to be seen’

Ben Barfoot, a British indie director, remembers that many of the films that influenced him were watched in noisy, distracting settings using what was then the latest in home entertainment tech.

As an example, he recalls his video-taped copy of Peter Jackson’s 1987 sci-fi film Bad Taste.

“All my mates would sit around, and we’d talk over it, and just be chatting, but we’d see it, quote it to each other… we’d go back and watch it again,” he says.

And he adds he would welcome the opportunity for a new generation of film fans to discover his movie Double Date within a video game.

“You want your art to be seen,” he says.

Nolan himself hasn’t said why he got on board with Fortnite. And it might seem an odd tie-up for a director known to be a champion of the real-world cinema screen.

But Epic Games – Fortnite’s creator – provided some insight when it explained why it was picked to launch Tenet’s trailer last month.

“When we do anything like this, it’s always born and driven from a relationship between creatives trying to bring something we think is awesome to life,” said Epic’s creative director Donald Mustard.

I Am Watching ‘Inception’ In ‘Fortnite’ And Metaverse Aside, It’s Not Great

Loserfruit reacts to her own Fortnite skin with pure elation

When is the Fortnite x Birds of Prey crossover with Harley Quinn skin?

Fortnite: So long Season 10! From map changes to The Visitor – how will it end?