My son is dressed as a giant banana and he is throwing hamburgers at me. I am making my getaway on a solid gold quad bike. For once, neither of us has access to automatic weapons.

No, our home schooling regime hasn’t taken a dark turn. This is Party Royale, the brand new Fortnite mode, where deadly violence is banned and where the emphasis is on messing about and engaging in non-lethal competitions – but mostly messing about. It’s only been live for a few days but already it feels like what the early-millennium online social experiment Second Life could have been if it had been built by game designers rather than Californian internet eggheads.

Launched on 8 May with an in-game party featuring live performances by Steve Aoki and Deadmau5, Party Royale starts like any Fortnite: Battle Royale session – with dozens of online players landing on a remote island. However, instead of then running about searching for guns before shooting each other until only one remains, Party Royale players can do what they like. It’s a smaller environment than the main game, but it still has rolling fields, meandering rivers and a little town crowded with fast-food joints. Vending machines distribute paint guns, plunger bows and other comedy projectiles with which to assault players, but no one gets hurt – you just get covered in glossy gloop or burger sauce. 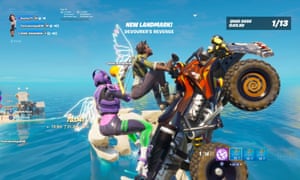 Dotted around the place, there are also lots of little challenges. Over here you can clamber onboard a speed boat and whiz through a series of markers to set the fastest time possible; over there you can jump through a time rift and then swoop through a series of aerial hoops – like the classic Nintendo game PilotWings. Each activity has a high-score table for players to aim at, so there is still a competitive element, but while we were playing no one seemed that serious about it, judging by the number of quad bikes and speed boats careering into the scenery.

Epic Games says that it will hold regular live events and there is a dedicated concert area; once again this brings Second Life to mind. That vast online metaverse experiment, which launched to much fanfare and fascination in 2003, was billed as an explorative virtual social space with its own culture and economy – and over the next decade many music artists and theatre groups gave virtual performances within its ever-changing world. But the technological demands of the service, together with the impossibility of moderating such a huge space, led to problems and controversies from cyber fraud to riots to flocks of flying penises.

Second Life is still going, and there’s a VR equivalent called Sansar, but it’s a lot quieter now, and it’s definitelt an adults-only space. Party Royale, where the visuals are bright and toy-like and most communication is through the medium of short dances such as the famed Floss and Electro Shuffle, feels much more like the Red Bull-guzzling little brother to Second Life. It’s the virtual world as bouncy castle.

Currently, all you can really do is pop in for an hour and race about the map with a few friends, firing each other out of the cannons on the pirate ship in Buccaneer Bay or throwing burgers at strangers from a speeding boat. But in the future, Epic clearly wants to run events and competitions, and this would be an amazing venue for film trailer premieres. 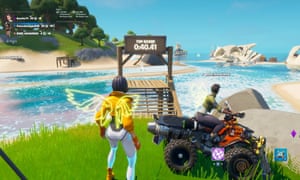 Players can’t build in the mode right now, but that could change. Maybe Party Royale could be combined with Fortnite’s creative mode, allowing players to construct their own buildings and racing challenges. There are currently phone booths around the map where you can change your outfits, but perhaps participants will one day be able to design and trade clothes, custom emotes or spray paint tags.

We’ve seen something like this before, in the form of PlayStation Home, a gamified online multiplayer metaverse that arrived for the PlayStation 3, a year after its launch. For a few years, PlayStation owners could decorate their own virtual clubhouses, explore a virtual shopping mall and make real-life purchases from fashion brands and furniture companies. Millions of PS3 owners gave the service a try, but it never attracted the player interest or commercial support it needed, and closed in 2015.

But now, with 350 million players who are used to hanging out in a vibrant, ridiculous online world filled with dancing bananas and cartoon skirmishes, Party Royale could be the experience that finally realises the idea of a playful, mass participation online metaverse. Right now, with a whole generation of teenagers desperate to go anywhere where their parents can’t or won’t follow them, it’s pretty much a godsend.

Report: Fortnite made 3 million in May 2019, PUBG keeps selling millions of units | DSOGaming

Fortnite For the Gnomes: All telescope locations

Fortnite Chapter 2 Season 3 Event: When, Where, Map Changes, The Visitor and More!