The Fortnite world has seen its fair share of drama. This much is expected, as streamers and professional players are in the public eye as much as other celebrities. One of the most high profile situations came from Tfue and Corinna Kopf. The two dated for a while, but after some on and off instances, the relationship ended.

They have both stated their intentions to stay friends, but surely, there have to be some stronger feelings that remain. Regardless, Corinna is “on the market,” as they say, and has had her fair share of encountering flirtation.

Just ask Ronald Mach, aka Ronaldo, pro Fortnite player for NRG. He wasted zero time hitting on Tfue’s ex in a recent stream of Fortnite, even though this was their first time talking to each other.

What did Ronaldo say to Corinna?

The 17-year-old Fortnite professional was nervous about playing alone with Corinna, as fellow NRG member Clix logged off for the evening. And for nearly an hour, Ronaldo added subtle sweet talk to his gaming companion as they played Fortnite Duos.

Mach mentioned changing his stream title to mention playing with his “future wife” before correcting himself. He would do this on and off during their session, calling Corinna “sweetie” and “darling” before quickly addressing her by her name. As they played more, the laughter got louder and more genuine. 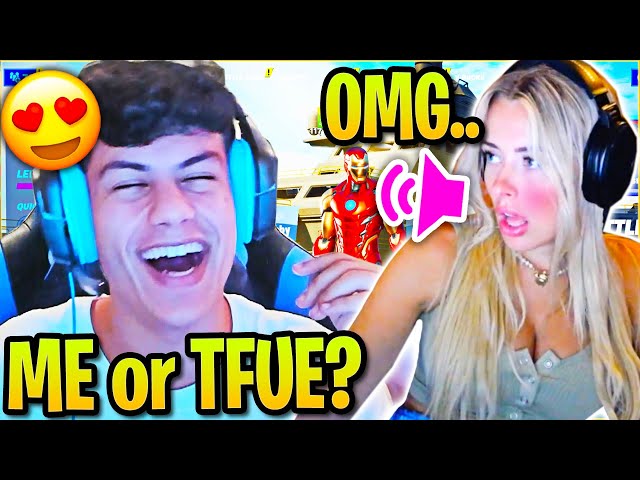 At one point, Ronaldo asked Corinna for advice on how to talk to women, and the conversation shifted towards height. In an attempt to impress her, the pro lied about being over six feet tall. He even gestured to Clix to crouch down to make him look taller when Kopf asked them to stand up on stream next to each other.

The entire time, it appeared that Corinna was playing along with Ronaldo’s flirty ways, and jokingly laughed about his height several times. She also brought up his age as a deterrent, as he is a minor while the Instagram star herself is 24. Ronaldo’s schooling came up, and Corinna casually mentioned she “forgot” that he is “little.”

Mach then hinted at asking her to prom. He never got the question out directly, but Kopf most definitely said no. He continued the flirting, and his object of attention mentioned how he needed to stop. She had yelled at Clix when he tried to flirt, so we’re unsure why she didn’t start doing the same with Ronaldo.

Corinna ended their time together by putting her foot down:

The aftermath of Ronaldo flirting with Corinna

Ronaldo sent out a couple of tweets that indicate he was more genuine than playful.

There is no name mentioned in the tweet, but it is safe to assume he was talking about Corinna.

It’s unclear if Ronaldo flirting with her will rub anyone the wrong way. He may be considered a friend by Tfue, as they have interacted in the past and played together. Perhaps this breaks some code between the Fortnite players. It all seemed playful and harmless, but you can never honestly know how someone feels deep down.