Home > News > Fortnite season 3 Bosses: Who are they and where are they located?

Fortnite season 3 Bosses: Who are they and where are they located?

The Epic Games’ Fortnite Chapter 2 Season 3 has begun with great excitement a lot of new things coming up. Where many were wondering who are the Fortnite Season 3 bosses, some are urged to find out their locations to own a Mythical weapon. However, in the latest update, you are presented with strong weapons and all the bosses in Fortnite Season 3 will mark their appearances in distinct locations. If you are wondering who are the new bosses and where are they located in the game, here is all you need to know.

Who are the Bosses in Fortnite season 3?

Fortnite rules the mind of its gaming community by bringing up new mythical weapons and bosses who are strong enough to sustain it. This new update of Fortnite Chapter 2 Season 3 has also brought 3 new strong bosses and they are “Jules,” “Kit” and “Ocean.” These Fortnite Season 3 bosses have two Mythical weapons each, which could be alluring for many.

Also Read | Mythic weapons in Fortnite Season 3: List of all new weapons that you will see

All the bosses in Fortnite Season 3 and their Mythical weapons

As we are already aware that the weapons possessed by the Fortnite Season 3 bosses are of a mythical rarity so there are only one per game, but they are extremely powerful. To get these weapons one has to get the boss, however, these places are filled with other players who also wish to win the Mythical weapons in Fortnite. Nonetheless, you can still try as winning over Jules will give you her Glider Gun and Drum Gun, Kit will drop his Shockwave Launcher and Charge Shotgun, while Ocean will give you her Burst Bottomless Chug Jug and Burst Assault Rifle. These guns are very powerful that may give you a heads up in winning the game.

Where are all the Bosses in Fortnite Chapter 2 Season 3?

All the bosses in Fortnite Season 3 are situated in different corners of the map. The Fortnite Season 3 Bosses location are Cotty Corner, The Authority (which was previously known as The Agency) and The Flotilla. In Cotty Corner in the south-east, you will be able to locate Kit with her Shockwave Launcher and Charge Shotgun, in The Authority, Jules will be slaying players with her Glider Gun and Drum Gun, and Ocean can be spotted at The Flotilla in the south-west with her Burst Bottomless Chug Jug and Burst Assault Rifle. 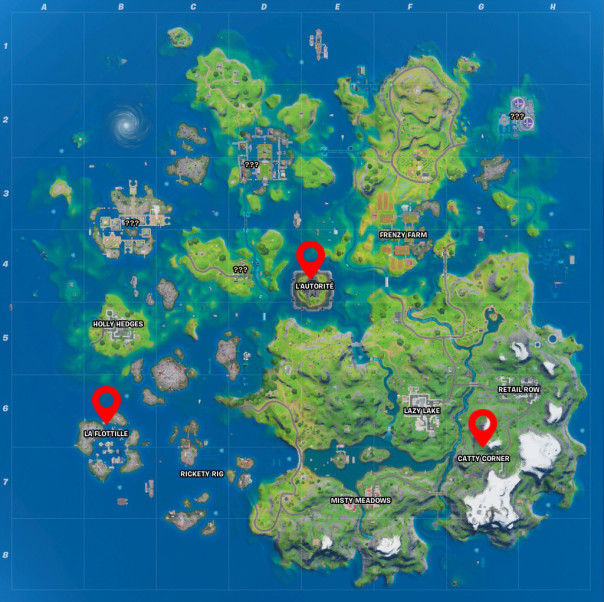 Kit is at Cotty Corner in the south-east.
Jules is in the centre of the map at The Authority.
Ocean patrols at The Flotilla in the south-west.

Also Read | Fortnite Season 3: How to update the game on PS4 and Xbox One?

The Fortnite Season 3 battle pass lets you build your own umbrella, meet Aquaman

Is Fortnite The New Social-Media Home For Teens?

Will the Fortnite World Cup 2020 be CANCELLED by Covid-19?