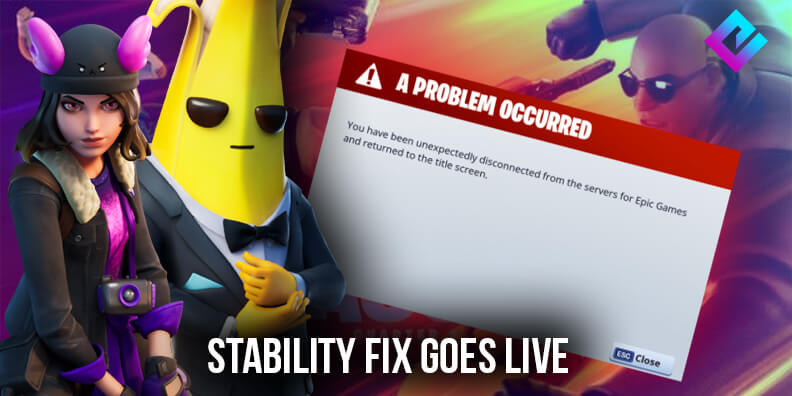 Epic Games just released a massive update for Fortnite battle royale on all available platforms earlier this week. It added a ton of new features and changed up much of what is going on in Season 2. However, the battle royale developer did not let the week end with just that patch.

Epic Games followed up on that update with a much smaller one on specific platforms that were dealing with some strange issues. As such, a new update is out now on three platforms, addressing some Fortnite stability problems that players have been affected by for some time now.

The Fortnite stability update is out now on the affected platforms of PC and mobile. That includes PC, iOS, and Android devices. At this time, Epic released the update first for PC and iOS with it scheduled to come out on Android at a later time.

It is possible that Android users already have access to it on the Google Play store, but at the same time, you might have to wait a bit longer to receive it if you are reading this right now. Regardless, the update is a key one for those three platforms as it addresses some major issues.

What the Update Does for PC and Mobile

Because of this, it is a smaller than usual update that addresses the Fortnite stability issues that players have been dealing with lately and it also fixes one particular problem cropping up on the mobile platforms. There was an issue recently with the HUD settings.

Players would adjust the settings for their heads-up display that includes all of the various prompts and notifications for the game while playing and it wouldn’t save their settings for some reason. Thankfully, this patch addresses that and shouldn’t be a problem anymore.

Players on Android and iOS should now be able to change their HUD settings to make it more to their liking and have it save for the next time they hop into a match of battle royale without having to change everything in the settings all over again.

However, that is just one half of the situation with this update. Players have also been dealing with some major stability problems in the game, ranging from the standard lag to low performance to even the game crashing for some of the affected players.

This Fortnite stability update is meant to fix, hopefully, all of these issues that players are currently dealing with on PC and mobile. Interestingly enough, it seems that these problems are, at least right now, relegated only to those three platforms.

If you are looking to play battle royale anytime soon during the crazy times we are in, we recommend that you go to your respective game store on your platform and update the game. We tested it out on the iOS version (iPad, specifically) and it was just under 500MB to download once we got into the game.

That is still a significant number for a mobile game update, so players should keep that in mind when using their personal mobile phone data and the like as it can take a chunk out of the monthly data caps for those who don’t have unlimited phone internet.

Popular content creator on Twitch, NickEh30, posted about the recent stability issues and performance problems that players have been encountering recently in battle royale. He posted a screenshot of an alleged Epic Games employee’s statement that was originally posted on Reddit.

The Reddit user JShredz recently shared some of their thoughts on the response from players regarding the apparent lag that happens in the game, because of the servers and not actually internet problems on the user’s end. The statement is great for shedding some light on the whole situation.

The user started out by noting that Epic Games currently uses the highest quality and fastest possible server hardware that is available through its present cloud provider partners. They went on to note that the amount of math that goes into providing smooth gameplay in Fortnite is insane and requires a ton of “horsepower” to make it work.

To make sure that the game is always ahead, Epic is making sure that it is only using the best of the best when it comes to the server and cloud hardware. This has resulted in “ten thousands of simultaneous processors” that the company is using at once.

These are all spread throughout more than two dozen different data centers that are around the world. To this point, the user addressed the fact that many players in the community will simply request for the company to build new servers in different locations to decrease ping and increase performance for players near there.

However, the problem with this is that there are limits to the density of large cloud locations that make sense for everything. Because Epic Games does not have the experience and knowledge as its partners do, it uses their expertise and experience to figure out what to do next.

While this might seem negative here, there is a positive note that the post ends on. Epic has a number of both short term and long term improvements that are coming to the game and overall networking experience that has been, unfortunately, slightly delayed by the recent events in the world but are coming nonetheless.

The most recent Fortnite stability fix is likely one of the first cases of these improvements coming to fruition. Stay tuned for more info regarding the other changes in the future.

Fortnite guide: Where to find Grimble’s love potion and how to deliver it