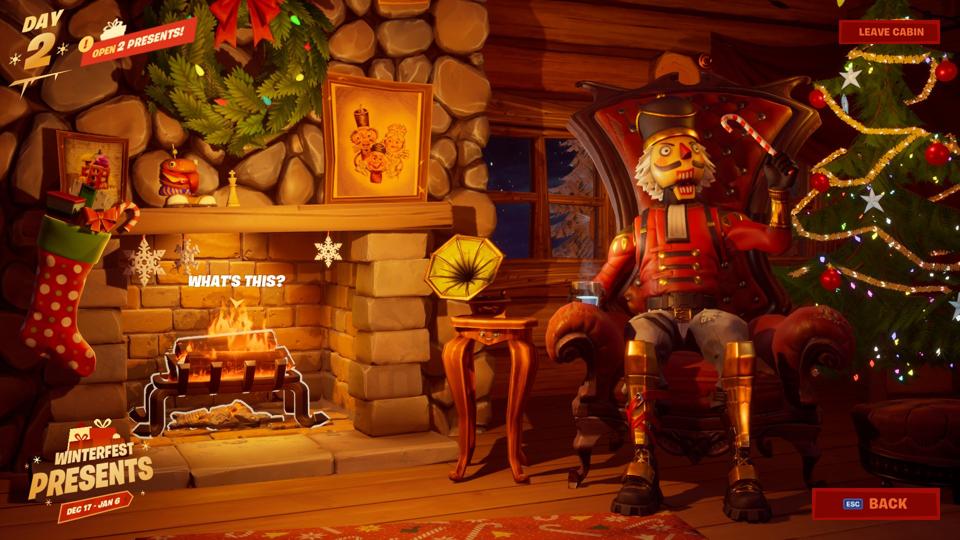 Fortnite is currently in the middle of its Star Wars event, but it’s about to layer another holiday-themed event right on top of it, Winterfest. The event will run from tomorrow, December 17, to January 6, and will feature something that Fortnite hasn’t done before, an interactive lobby that will reward players will free gifts if they log in each day.

The first images and the video of the cabin have come online thanks to various Fortnite leakers who have gone back to leaking things again after not doing so for the Star Wars event. From @ParaLarek comes this video of the lobby in action:

There are various pieces of the lobby you can interact with including getting presents from the stockings over the fireplace each day, which is actually one of the challenges. So is warming yourself by the fire which may do something significant, or may just be a bit of animation. I’m not sure what the Nutcracker does, or if you will be shown sitting in that chair using your own skin. That will likely look funny in a lot of cases. I’m sure there will be a lot of other easter eggs in the cabin to be found here.

We already have most of the challenges for the Winterfest event leaked online, some of which have to do with this cabin, others that have to do with things like frozen loot and ice boxes which were added in the game in the recent update.

Here they are, as these leaked a while back:

Search Holiday Stockings in the Winterfest Cabin (0/1) Stoke a Campfire (0/1) (Icon)Eliminations with an Unvaulted Weapon (0/5) (Wrap)Hide inside a Sneaky Snowman in different matches (0/2) (Emote)Warm yourself by the fireplace in the Winterfest Cabin (0/1) (Skateboard)Dance at Holiday trees in different Named Locations (0/5) (Emote)Search a chest within 60 seconds after landing from the Battle Bus (0/1) (Skateboard)Use Presents! (0/2) (Pickaxe)Open Frozen Loot (0/1) (Music)Deal damage to an opponent with a Lump of Coal (0/1) (Skateboard)Destroy a Sneaky Snowman with a Lightsaber or Pickaxe (0/1) (Spray)Search Ice Boxes (0/2) (Spray)Light a Frozen Firework found on beaches in Sweaty Sands, Craggy Cliffs or Dirty Docks (0/1) (Glider)Search Ammo Boxes at The Workshop, Shiver Inn or Ice Thrones (0/2) (Contrail)

All of those give you various holiday-themed prizes from back bling to pickaxes to banners and more. And I think you’ll get more prizes from your stockings at the cabin, maybe even V-bucks or something.

Anyway, we’ll see how this plays out in practice tomorrow when the cabin is live. See you then.

Fortnite is adding split-screen multiplayer to its battle royale mode

Fortnite Floating Rings at Steamy Stacks locations: Where to collect all of them