Home > News > Fortnite’s cross-play made history, but now some players hate it

Fortnite’s cross-play made history, but now some players hate it

When Epic Games was able to convince Sony and Microsoft to play nice and allow fans on both platforms to queue up with one another, the internet at large rejoiced. Finally, here was a game that was big enough to get rid of petty console war squabbles in favor of a better player experience.

The feature wasn’t limited to consoles, of course: Mobile, console, and computer users can all enjoy the game together via cross-play. Last month, Epic announced that cross-play would do its best to ensure that players of similar skill levels are matched up together, regardless of platform.

“You will be more likely to match with players of similar skill, and as you get better, so should your opponents,” the Epic blog post read.

It all sounds fair in theory, but online, Fortnite players seem largely miffed about the implementation. One of the top pinned threads on the Fortnite subreddit for a month now complains about the “forced” nature of cross-play, with multiple linked threads claiming that the feature isn’t fair to players on consoles or mobile platforms. “Playing console squads is a death sentence now,” one Redditor says. “You get insta killed by 4 sweats who can jump all over you and just make you look like a clown.” On places like Twitter, it’s very common to see angry fans bemoaning cross-play.

“Forced crossplay on Fortnite makes me wanna kill myself,” one dramatic tweet says.

“PC players won’t complain, but this is making many console players discouraged and will lead to them quitting the game,” another tweet claims.

“Matchmaking has been irking me since skill based & cross-play with PC were introduced,” another tweet reads. “I want to be able to enjoy the core mode but these changes have killed it for me.”

Louis Valentino, a Fortnite player on PC, admits that he does feel as if he has an advantage over anyone playing with a controller.

“There’s even more of a gap between console and PC — even if you’re using a keyboard and mouse on console, you’re limited to 60 frames-per-second and can’t adjust graphics settings that you can on PC, such as disabling shadows and lowering textures/effects,” Valentino said in an email.

These small details can make a huge difference. A top post on the competitive Fortnite subreddit today showcased that visibility on consoles is poor compared to what players on PC can see, merely by tweaking some options. 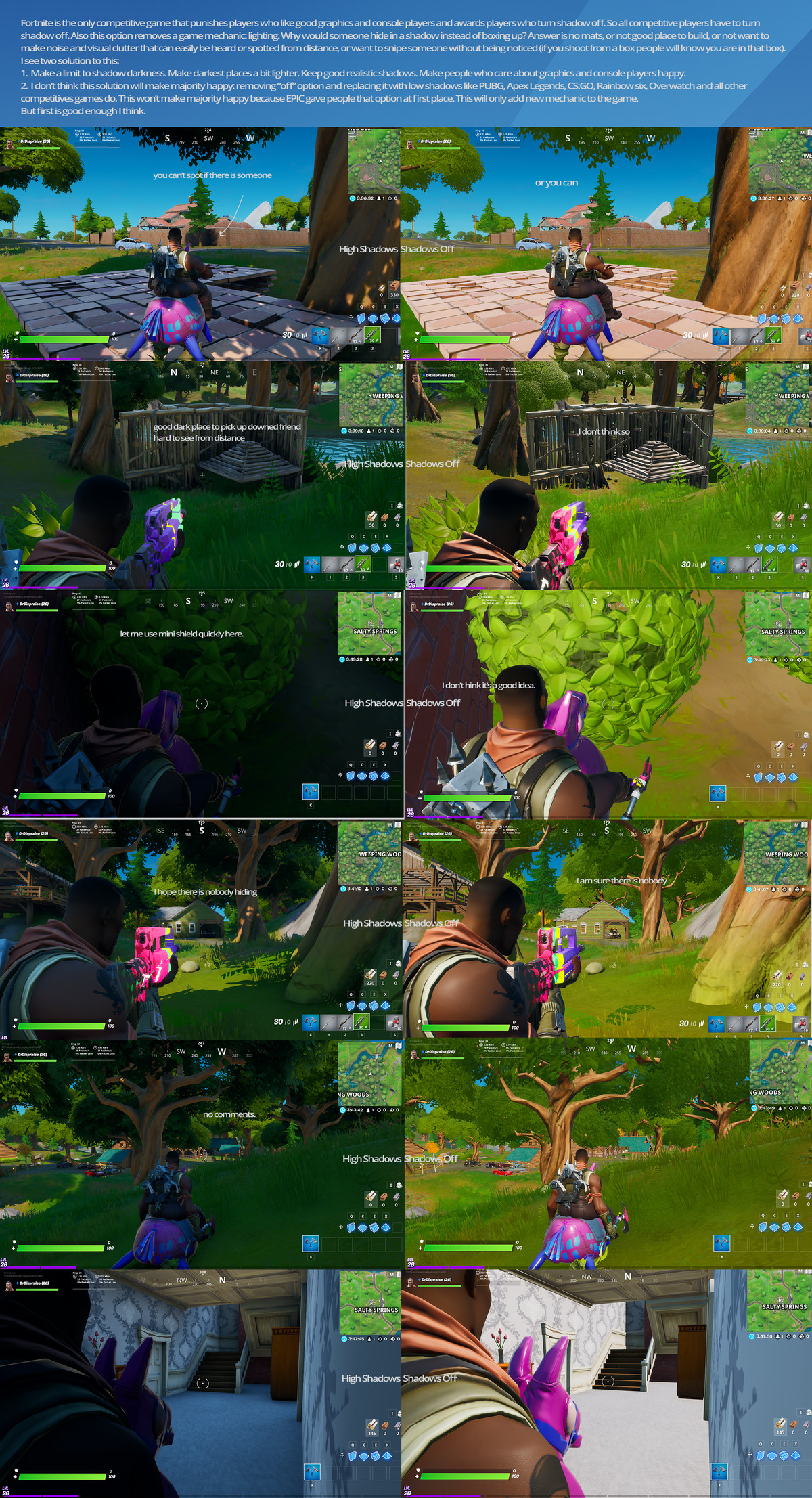 Aaron Worob, a fan who primarily plays on mobile and Nintendo Switch, says that, since skilled-based matchmaking went into effect, it has become hard to ignore how much of an advantage mouse and keyboard provide when it comes to building and editing structures. But in Worob’s experience, the matchmaking does actually do its job.

“My squad and I are doing nearly as well as we did before the change,” Worob said in an email.

Worob can, however, tell when he’s up against a mouse and keyboard player — they can always input commands faster, which has lead to more “build battles” that didn’t use to happen as much on mobile or console platforms.

“The frame rate dipping has gotten much better on Switch, and the impact of dropped packets seems to have lessened a bit, but we traded that out for the frustration of fighting against an opponent with what feels like a thousand more input options,” Worob says.

When matchmaking goes according to plan, however, even those on PC can feel the heat. Valentino tells Polygon that he does lose to controller or console players from time to time, though he doesn’t realize his opponents are on a different platform until after the fact.

“The only way I can really tell is by spectating after they’ve killed me because the way they change weapons is obvious … you can’t swap from weapon slot 1 to weapon slot 4 instantly, for example,” he says. “I’ve never killed a player and said to myself ‘they’re on a controller.’ It’s difficult to tell during a fight.”

For Valentino, the difference in skill gap is situational — sometimes it comes into play, sometimes it’s not a factor at all. This was a common thread among players Polygon interviewed, which suggests that some cross-play detractors might just be using social media to vent after a loss. It’s easier to blame your platform or inputs than to admit that perhaps you were outplayed, and deserved to be. To wit, during the Fortnite World Cup this year, one pro player managed to get second place during the duos portion of the tournament despite using a controller.

“There is a clear and significant disadvantage with the limited number of buttons we have, and the max camera movement speed tied to our input method, but it isn’t impossible to get a win,” Worob says. “It’s just a different kind of frustrating.”

There are, obviously, still things Epic can improve, especially when it comes to build stability. Right now, for example, controller players say some basic commands and features, such as smooth editing transitions and proper trap placements don’t work as intended, and haven’t for months. At the same time, however, controller issues aren’t the only potential pain points for ensuring a smooth matchmaking experience.

“There will always be an issue getting perfect skilled based matching, but the same could be said about someone’s ping to the server location, internet access speed, whether they’re running the latest hardware or a step-down model,” Valentino says. “I think it’s something Epic will adjust and make better. Players will be salty regardless.”

Fortnite Afterlife Party with J Balvin, where, how and when

Should Fortnite qualify as a sport?

Fortnite: Where To Destroy Grills Map And Locations Guide

PUBG MOBILE LITE review: Play it only if you can’t run PUBG Mobile your phone