Pioneering rock and metal label Earache Records have joined forces with the innovative team behind Five Vectors to enhance Fortnite gameplay with the raw power of rock through the brand new app, Apollo. 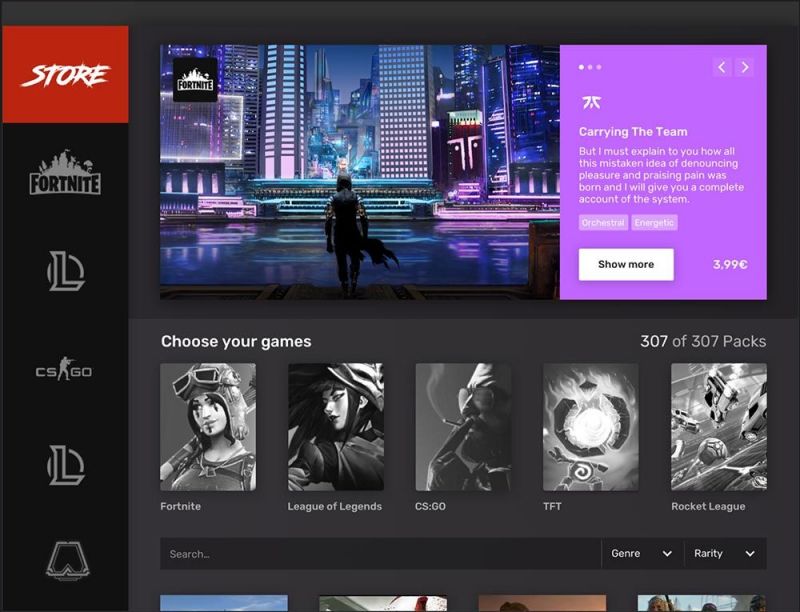 Available for installation on Windows systems, Apollo is a standalone app that holds its own level of genius in bridging the gap between the gaming industry and the music industry. Built up from millions of points of data, the Apollo app offers up carefully curated packs of music that will be integrated into gameplay to allow key moments in games that the user is playing on their PC (such as kills, revivals and wins) to be enhanced by music. The app supports Fortnite, League of Legends, Teamfight Tactics, CS:GO and Rocket League.

As of now, any of Fortnite’s 250 million recorded players are able to download the Apollo app and purchase the ‘Bone Shaker’ pack, which holds tracks from Earache’s very own fiery alt rock duo Haggard Cat for integration into Fortnite gameplay. Incorporating tracks from their colossal 2020 album Common Sense Holiday (“one of the wildest punk rock albums of the year” – Distorted Sound Magazine) and their mighty 2018 album CHALLENGER, Haggard Cat’s ‘Bone Shaker’ pack is chock full of atmospheric power that, through the Apollo app, will breathe fresh new life into rock fans’ Fortnite experience.

Founded by Wasae Imran, former Global Head of Video Network at esports giant ESL, and Andres Lauer, former Head of Digital Strategy at Universal Music Central Europe, Five Vectors’ mission is to integrate the powerful emotive and social qualities of music into gameplay to extend the immersive experience for gamers: “We want to prove that it is possible to provide gamers with contextualised music – music that speaks to multiple communities with their own idiosyncrasies. The gaming industry is young and has never had the chance to truly experiment with music in this way.”

The label that brought the world rock and metal trailblazers such as Napalm Death, Rival Sons, Blackberry Smoke and Morbid Angel, and that created and curated Glastonbury Festival’s first ever metal stage, Earache Records is thrilled to be a part of this groundbreaking fusion of gaming and music: “We want to thank Five Vectors for allowing our music to be a part of this exciting new venture. We love that Five Vectors are driven to fill a void in the gaming universe where the value of music is not recognised to its full extent as yet. We think Haggard Cat’s rousing, riff-and-rhythm-filled recipe of fire-starting passion and adrenaline will make for an exciting addition to the Fortnite universe for those who purchase the pack via Apollo.”

Whilst Earache Records will be the first record label to be a part of the platform, Haggard Cat’s music will also make up the first ever rock pack on the app. “When Five Vectors first approached us to be a part of their new app, Apollo, we were absolutely flattered and fired up to be involved in such a cool new concept,” enthuses lead guitarist and vocalist Matt Reynolds. “There’s nothing finer than blasting a fellow gamer into oblivion whilst getting pounded right in the ears with some tooth-rattling Haggard Cat riffs, and we can’t wait for the gaming community to experience it for themselves!”

Fortnite is a masterclass in flexibility | Opinion

When do Fortnite weekly challenges for week 3 come out? Find out here

PUBG Lite is Releasing Globally as Open Beta; Ultimate guide on how to become a Primary player?