Lannan “LazarBeam” Eacott is one of the most notable gaming influencers within the Fortnite and YouTube communities. One of the biggest and most viewed YouTube content creators in Australia, he currently has 14million subscribers.

Recently, the famed Australian YouTuber uploaded a video showing how it’s possible to win a match of Fortnite without moving a bit. “I’m not joking when I say this, we are literally going to sit in this chair the entire game,” he says. His incredible strategy revolved around landing at the center of the map, using the Have-A-Seat emote, and then not even touching the keyboard anymore.

LazarBeam roleplays a flag in Fortnite

this is my mona lisa..

my statue of david..

Landing at The Agency in his first attempt, he takes a seat on a flagpole and then does nothing. Opponents keep fighting each other, engaging in build battles, but no one looks up at the Aussie sitting in a chair on top of a flagpole. Eventually, his luck runs out as the zone shifts, and Lazarbeam dies to the storm.

Repeating the same strategy in attempt #2, he gets eliminated by a helicopter, placing lowly at #73. Several attempts later, the YouTuber evades a few choppers by hilariously roleplaying a flag, sat on top of the flagpole. But he keeps getting unlucky with the zones, continually falling victim to the storm. He could only secure a top 4 placement at best after hours of sitting and doing nothing.

Eventually, Lazarbeam evolved his not-moving strategy based around expecting opponents not to spot him while he sits on flagpoles. “The problem is, you have to get a perfect circle in this. It takes hours. Even if I get a perfect circle, people die too slowly; there’s too many alive,” he explained. So the Aussie devised a masterpiece for the ultimate victory royale.

Part of his ingenious plan involved his friend “mrfreshasian” trimming down the lobby, while the famed content creator would still need certain in-game aspects to be in his favor. It would ensure the laziest Victory Royale in Fortnite for LazarBeam.

“My friend Fresh is one of the best players in the world. I’ll stream snipe him without him knowing, and he’s going to kill the entire lobby so quick that it’s going to be just me and him left. Then I’m going to run into his room and unplug his PC,” he stated as he embarked on an almost impossible journey.

In his final attempt, the Aussie concealed himself in a tree near Frenzy Farm. As he comfortably sat on a chair atop the tree, his friend began slaughtering the entire lobby. Fresh did the heavy lifting, slaying players all around, while Lazarbeam made top 10 as fortune kept favoring him with the zones. 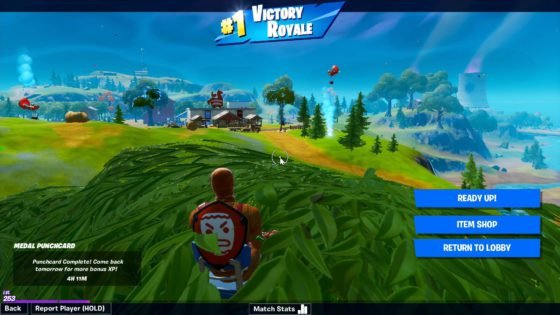 After his friend killed the last remaining player, the YouTuber made his ultimate move. He busted into Fresh’s room, took over his PC, and exited Fortnite, thereby securing the laziest Victory Royale in Fortnite’s history. “Holy sh*t! It worked,” LazarBeam exclaimed. His match stats were all 0’s apart from the 3-meter distance traveled.

Thus, Lannan Eacott proved that it is indeed possible to win by sitting in a tree all game. Some might criticize his methods, but it still required a lot of planning, execution, and some elements of the game being in his favor. Plus, living with an insanely skilled gamer friend definitely helps.

[Maintenance] Servers Under Maintenance on April 16 Starting 3:00AM UTC

You merely adopted Fortnite’s Slurp, this ‘Big Chuggus’ skin was born in it