New updates are being added to the bottom of this story….

Fortnite is one of the most popular battle royale games on the planet. Fortnite was released on July 21, 2017, and since then the game is ruling the Twitch charts. Fortnite Season 10 is currently underway, and it has added many new elements to the game.

Today, Epic Games has shared a teaser that hints towards the crossover between Borderlands 3 and Fortnite. The artwork shared in the official tweet reveals a mosaic-style Borderland character. The possibility of crossover cannot be denied as Epic Games has collaborated with many big franchises in the past, including Marvel, Stranger Things, and many more. Epic Games will also release update v10.20 for the game today. It is expected to bring a lot of changes to the game. In Fortnite Season 10, we have already seen the addition of Brute vehicle and Junk Rift item.

Speaking of Junk Rift item, it has been disabled from the game. Epic Games removed the Junk Rift item from the game yesterday, but did not disclose the exact reason for its removal. You can find more details on this matter by heading here. 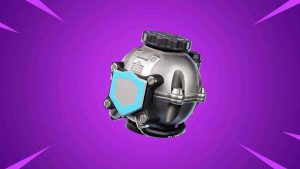 Today update will add a new item ‘Shield Bubble’ to the game. The description of the item reads, “This is one bubble ‘that’s not easy to burst. Shield yourself from projectiles with this protective dome.” This means it can protect players from incoming grenades and other projectile-based attacks.

It will be interesting to see for how much duration the Dome Shield will protect the players from the incoming projectiles. The use of Shield Bubble at the end of the match can also change the course of the battle, as it can protect a player from rocket launcher attacks. Scheduled maintenance has begun. Following is the downtime info shared by team Fortnite at Aug 27, 07:45 UTC:

Scheduled maintenance is currently in progress. We will provide updates as necessary

The maintenance is now complete.

The scheduled maintenance has been completed

Going by reports proliferating on micro-blogging site Twitter, Fortnite servers are down. It’s because of the server maintenance ahead of v10.30 update.

Break out of your shell!

Servers are live again and Fortnite update v.10.30 is live. You can read complete details by heading here.

Servers are back up and v10.31 is now live. To know more about the changes this new patch brings, head here. Fortnite update v10.40 is live, and you can check the complete patch notes by heading here.

We’re aware some PS4 players may be experiencing issues when attempting to log in.
We’ll provide a status update once we have more information.

And here’s what Ubisoft has to say:

We’re aware of an issue currently affecting connectivity on PS4 and are working towards resolving this. We apologise for any inconvenience caused and appreciate your patience. Please be sure to check this thread for future updates.

As informed by @FortniteGame, the down time for the update v10.40.1 has now started. Also the patch is expected to be of a larger size than the usual.

As a reminder, the Patch Notes will be available after downtime has ended.

Please note that the patch size will be larger than usual on Nintendo Switch.

The issues related to the combine after installing the latest patch have now been sorted.

With the release of v10.40.1, the issue involving some players having difficulty queuing into The Combine has been resolved, and the mode has been re-enabled on iOS and Android.

Downtime for patch v11.01 has begun now. The patch includes new content for Save the World and addresses some known game issues. 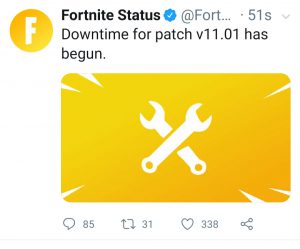 Live server maintenance has been scheduled for today, after which update v11.10 will go live.

Facing your fears is way more fun than fleeing them.

Downtime is now over as update v11.10 is now live. Additionally, players on iOS won’t be able to login until the patch goes live on the App Store. For more details about the update, head here.

Players on iOS devices will be unable to login until the client update for patch v11.10 becomes available on the App Store

Maintenance has been scheduled for tomorrow, i.e. Dec 05 to push a bugfix update (v11.21).

We have maintenance patch v11.21 scheduled for tomorrow. Included in this maintenance is the addressal of some known game issues, which you can find on our Trello board.

A maintenance is scheduled for tomorrow.

The downtime has begun.

Downtime for v11.30 has begun. Stay tuned for updates.

The downtime has now ended. Here’s what the team said:

For what’s new in each game mode, check out the posts on our News page.

For all the known game issues addressed by v11.30, head over to our Trello board.

Considering the scheduled maintenance for today, downtime has begun for the deployment of v11.31.

Downtime for v11.31 has begun. Stay tuned for updates.

Maintenance is over and the update v11.31 is live now.

Incoming is a maintenance alert for the deployment of update version 11.4.

Downtime is over and the update v11.40 is now live.

Downtime for the deployment of update v11.50 has begun.

Downtime for Chapter 2 Season 2 has begun. Maintenance has been scheduled for tomorrow.

Downtime for v12.10 has begun. We’ll provide an update when downtime ends.

Downtime is over now.

Downtime for the deployment of update v12.20 has begun.

Incoming is a maintenance alert for the deployment of the update v12.21.

Downtime has begun for the deployment of the update v12.30.

Downtime is over now. Here’s what you should know:

Players on PlayStation 4 and Xbox One will need to redownload Save the World after the 12.30 update if they own it.

You can still play Battle Royale directly by cancelling the update after downloading the regular 12.30 update.

Incoming is a maintenance alert.

We have a maintenance patch requiring downtime scheduled to release on April 8. Downtime will begin at 2 AM ET (0600 UTC). We’ll provide updates both when downtime begins and ends.

Downtime for the deployment of update v12.40 has begun. Head here for the complete patch notes.

Downtime for the deployment of the update v12.41 has begun. Head here for the detailed patch notes.

Incoming is a maintenance alert for the deployment of the update v12.50. Head here for the complete patch notes.

A maintenance has been scheduled for today for the deployment of the update v12.60.

PiunikaWeb started as purely an investigative tech journalism website with main focus on ‘breaking’ or ‘exclusive’ news. In no time, our stories got picked up by the likes of Forbes, Foxnews, Gizmodo, TechCrunch, Engadget, The Verge, Macrumors, and many others. Want to know more about us? Head here.

Deadpool’s secret skin in Fortnite will have a new variant