“Fortnite” is already one of the biggest games on the planet — more than 250 million people are estimated to have given the game a try — and over the last year it’s proven itself relatively adept at advertising, especially for Disney brands such as Marvel and “Star Wars.”

On Saturday, “Fortnite” put director J.J. Abrams live into the game to introduce a less-than-60-second clip of his upcoming film “Star Wars: The Rise of Skywalker,” due in theaters next week. Abrams joked that he’s never been thinner than his digital “Fortnite” self, and he traded some barbs with a Stormtrooper, comedian Ben Schwartz portraying the world’s most juvenile First Order soldier. Then those who tuned in watched a brief clip featuring Daisy Ridley’s Rey, John Boyega’s Finn and and Oscar Isaac’s Poe.

It furthers Epic Games’ continued attempts to evolve “Fortnite” from a competitive multiplayer game to a communal hangout full of limited-time events. Earlier this year, the game was given a makeover to promote “Avengers: Endgame” and before that “Fortnite” hosted a live in-game concert from electronic artist Marshmello. The goal is to “push the idea of what a persistent virtual place can be” said, Donald Mustard, Epic’s worldwide creative director, at Thursday evening’s Game Awards. The host of the Game Awards as well as today’s “Fortnite” event, Geoff Keighley, described it as a “talk show.”

Consider it a fascinating experiment designed to meld a living narrative with an often aggressive, albeit cartoonish, game. Yet it’s also an acknowledgment that our virtual worlds are hangout spaces every bit as vital as our physical ones, using, as Keighley described on social media, “game worlds as a basis for original programming.” With players having the ability to walk around the virtual world — and, of course, dance while Abrams spoke — “Fortnite” went from a battleground to a theater stage.

And there was clearly demand for the event Saturday, as Epic delayed it for 10 minutes to allow more players to join. I arrived about 40 minutes early but eventually left and rejoined at the designated 11 a.m. PST start time, as my digital avatar was routinely being killed.

That’s one potential shortcoming of hosting communal activities in a game. One must be willing to adapt to the rules of the digital universe. Ultimately, if you come alone, you’ll need to come ready to play. Blissfully, combat was turned off closer to the event’s launch. Commercials, after all, must arrive with no distractions, and once things got underway the game shifted our attention to the Millennium Falcon entering the “Fortnite” world amid a battle with First Order ships.

Before the clip we were treated to some of “Fortnite’s” adolescent humor. Those participating were asked to vote on what we would see, with choices from “Darth Jar-Jar” to a power ballad duet between Rey and Adam Driver’s villain character Kylo Ren. It was a light attempt to create a sense of audience participation but felt more like padding to make up for what would be such a brief scene from the film. 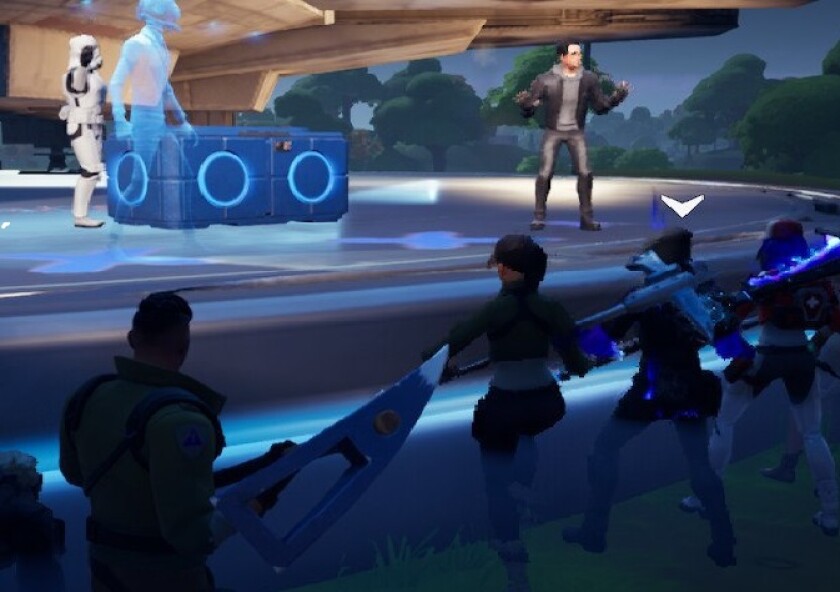 In a screengrab, virtual J.J. Abrams introduces footage from “The Rise of Skywalker” via “Fortnite.”

As for the actual clip from “The Rise of Skywalker,” it wasn’t one that provided any significant spoilers, unless you’re the type who analyzes every fashion and weapon choice of the characters. But it was entertaining enough, and it showed that while Abrams is bringing the Skywalker saga to an end, he’s thankfully doing so with the franchise’s trademark goofy humor.

We watched our heroes exit a ship that appeared to have just landed on a First Order starship. They proceeded to take out a couple of Stormtroopers and sneakily zip around enemy territory before being cornered by more Stormtroopers. This allowed Rey to flash some of her Force powers, namely the famous Jedi mind tricks. “It’s OK that we’re here,” she said, as the troopers proceeded to agree. “It’s OK,” said one, before another added more comically, “It’s good.”

The clip ended with Poe making an aside to Finn: “Does she do that to us?”

Fans didn’t leave empty-handed. Well, virtually empty-handed. Those who took in the clip were gifted a lightsaber to add to their “Fortnite” weapon arsenal.

This isn’t the first time Epic has dipped into the “Star Wars” universe. The company’s technology helps power the Millennium Falcon: Smugglers Run ride at Disneyland and Walt Disney World. The latter represents a fully game-like theme park attraction, with six guests taking on the role of pilots, gunners or engineers as they go on a mission to steal cargo.

Saturday’s brief snippet likely wasn’t going to live up the two and a half day pre-event tease, especially for those who had trouble logging on or didn’t want to deal with all the “Fortnite” trappings. But like a Super Bowl commercial, we gather round because it’s hard to resist a spectacle, and for many, “Fortnite” is as much a place to hang with friends on the weekend as it is a spot to play.

The Fortnite Star Wars event will haunt me

The top 5 Fortnite streamers in 2020 – Sportskeeda