Just when you thought that the Loot Lake Vault couldn’t hurt us anymore, it begins to appear on screens in Season 2 locations.

The ties between Fortnite Chapter 1 and Chapter 2 are loose, but they’re there. It’s hard to tie the two parts together, but a look around the map shows you that these chapters are somehow connected.

The most evident connection is probably at Steamy Stacks and the Kevolution Energy plant. There’s a small statue of Kevin the Cube along with some sort of purple liquid that seems to be a byproduct of our old buddy.

This isn’t the only relationship, of course, and more are getting dug up as Chapter 2 rolls along. We can assume that we’ll get a complete overview at some point, but we can only follow clues, right now. Reddit user and Fortnite lore specialist u/Koooooomar discovered a suspicious image that’s been slowly sharpening over the past few weeks.

On some of the screens at The Shark and The Yacht, you can see a faint, blue circle that appears to be the Loot Lake vault from Chapter 1.

Someone from Chapter 2 is accessing information from Chapter 1. It could even be a character who has been working behind the scenes the entire time – possibly the Chaos Agent. 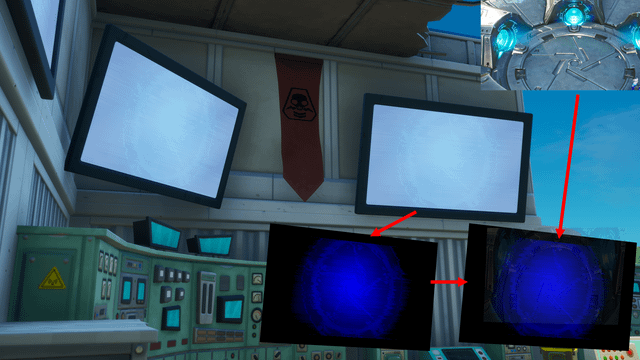 This piece of evidence draws my mind directly to the new hatches that have spawned around The Agency. This central location has a lot in common with Loot Lake, and the connection between the two is growing closer.

What if this is an image of a structure under The Agency? Could we be seeing the events from Chapter 2 play out in a similar fashion to the last chapter? This discovery prompts so many questions.

Could the lake around The Agency be a portal to the Chapter 1 map? Could these hatches be the first stage of uncovering this connection? What else do these two worlds have in common? Only time will tell.

Four of the Best Creative Maps in Fortnite

5 most popular skins in Fortnite as of 2020 – Sportskeeda