As some parents may attest, the school holidays will have seen hundreds of children on their summer break playing computer games.

But any protests from parents may be met with claims that they could be making millions in the future.

Following the Fortnite World Cup in July, in which 100 gamers fought for a share of a $30m prize pot, Scots gamer Stuart Smith took away a cool £50,000 from the competition.

So who better to sit down and chat all things gaming that a Fortnite-loving eight-year-old who wants to follow in his footsteps?

Jonah loves playing Fortnite with his sister and his family and eagerly explains what the online game is about.

“Fortnite is a game where you are in a battle bus and you’ve got to skydive out of it and land somewhere, get all your weapons and try to fight everyone to get placed first,” he says.

So armed with a clipboard full of questions and the chance to play against one of the top Fortnite players in the world, Jonah set off for East Kilbride to meet the 20-year-old and find out more about gaming. 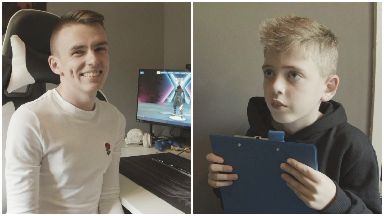 Jonah sat down with Stuart to grill him on all things gaming.

Jonah: Tell me about the competition in America. Was it your first time visiting New York and what’s your highlight of the trip?

Stuart: It was my first time in America, it was brilliant. It’s so different to here, you walk down the street and there’s thousands of cars. I think the highlight for me was playing on stage in front of thousands of people was amazing.

I went to the Statue of Liberty on a boat, that was really good and went up the Empire State Building

J: How did you qualify?

S: Well I became top two in the world on a speed trial in a creative death run which is basically an obstacle course and you have to get from A to B as fast as possible. I was top two which is the requirement, only the top two times in the world will qualify and I was second luckily.

J: When did you start gaming and how did you get into gaming?

S: When I was younger, me and my friends, you know Crash Bandicoot? The Playstation game?

S: Well we played that. When I was eight, I found out I had scoliosis and I had a big operation. I was in my room for nine months, I couldn’t do much. So I bought a PS2 and started playing Crash Bandicoot again and I actually became one of the best in the world. I set four world records on that game. Which are beaten now!

J: Tell me about Fortnite.

S: Fortnite is quite a unique game. I’m sure you know, you play it yourself. You just try and survive really.

J: Is gaming something you want to make a career out of?

S: Definitely, definitely something I want a career out of. It’s a hard thing to do, there’s a lot of people on YouTube and Twitch, it’s hard to make it. But I would love to. 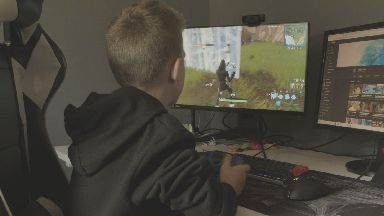 Jonah gets to grips with playing Fortnite with Stuart.

J: What would you say to parents who tell kids to get off video games?

S: (Laughing) That was also my parents, telling me to go outside and try something else until this competition and then they said I could play a bit more!

J: How often do you train?

S: I wouldn’t say that I trained professionally, I play for fun. But I think I just got naturally good at the game.

J: Were you nervous about the competition?

S: Oh yeah, I was so scared to go on that stage. But once I was out there playing, I didn’t notice the crowds.

J: Since you won all this money are you going to go back to studying accountancy?

S: I am, I’m going back next month. Obviously the money’s a lot and it’s great but it’s not life changing. I still have to plan a career and live my life.

J: What’s your favorite thing about the gaming community?

S: I think it’s amazing how we can all play together. Were all in our homes chilling but we’re having a good time.

J: How do you feel about playing me at Fortnite?

S: I’m scared, I think you’re going to beat me!

Want to receive the latest headlines straight to your inbox? Subscribe to our ‘Morning Briefing’ newsletter.

Thanks for subscribing to our ‘Morning Briefing’ newsletter.

Download: The STV News app is Scotland’s favourite and is available for iPhone from the App store and for Android from Google Play. Download it today and continue to enjoy STV News wherever you are.

'Fortnite' Season 10 Challenges Are A Welcome Change From The Past

How to win money in open Fortnite events

What is in the Fortnite Item Shop today? Infinity returns on April 13

PUBG vs Free Fire: Why PUBG is better to play than Free Fire