Where to find all the XP coins in Fortnite Chapter 2, season 5, week 11

Completing the battle pass is the ultimate goal of many Fortnite players throughout a season. Even after unlocking everything, there will be more exclusive content locked behind the additional tiers, meaning that XP grind never stops.

Though there are countless weekly and daily challenges that will reward you with considerable amounts of XP, not all of them will be easy enough to complete in a couple of minutes. Some quests require you to squad up with friends and perform difficult tasks. If you don’t have the time to complete similar tasks, your best bet will be substituting them with XP coins.

Epic adds a new set of XP coins to the Fortnite map every week. You can easily collect all of them in a couple of matches, and you’ll always be able to pick up the new ones as they get released. Despite looking like small amounts of XP at first, the total will add up as you collect all of them, and doing so every week will help you skip weekly daily challenges that were too tough to begin with.

The XP coins come in four different colors, and each reward amounts of XP.

Here’s where you can find all the XP Coins in week 14 of Fortnite’s Chapter Two, season five. 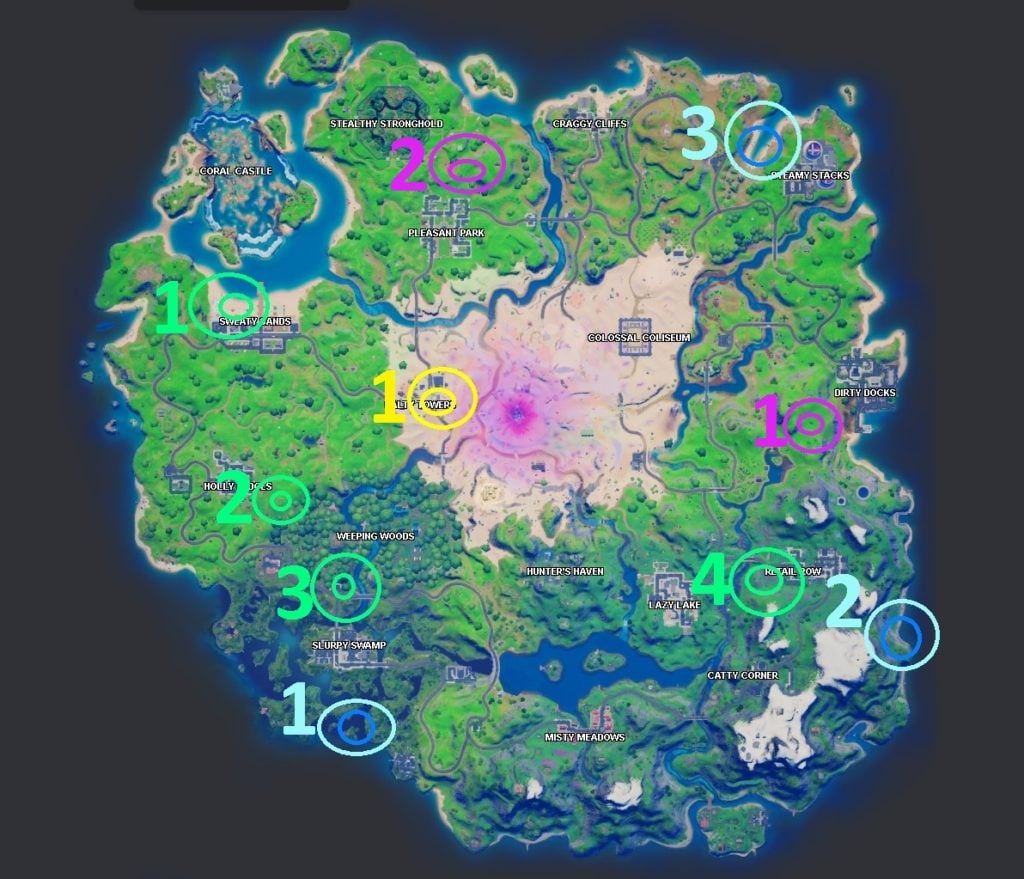 For the first green coin, you’ll need to visit the hot sands of Sweaty Sands. Head over to the beach section of the landmark and move west. You should notice a hut as you get closer to the location, and the coin will be just around there.

The second green XP coin will be waiting for players near Holly Hedges. It isn’t inside the landmark, however. You’ll want to go southeast of the landmark and keep moving toward the start of Weeping Woods. The coin can be seen under three trees separated from the forest.

You won’t have to travel that far to find the third green XP coin since it’s located just at Slurpy Swamp’s entrance, a nearby landmark to Holly Hedges. You can find the coin inside a gas station that’s in the north entrance of the landmark.

The fourth green XP coin is located on the other side of the map, near Retail Row. It’s inside a flower field around the west entrance of the landmark.

The first blue XP coin can be found at the south edge of Slurpy Swamp. You’ll need to keep moving until you get to the edge of the map, and the coin will be waiting for you on the water.

The second blue XP coin is located at another edge of the map, around Retail Row. You’ll need to move southeast from Retail Row while passing the mountains. The blue XP coin will be sitting above the water by the shore.

The blue XP coins are far away from each other in week 14,. The third blue XP coin is located around yet another edge of the map at Steamy Stacks. Move west from the middle of the landmark until you come across a U-shaped shoreline. You’ll notice the coin once you get there.

Purple coins this week seem to be placed in the middle of two landmarks. The first purple coin can be found near two large hills. These hills are to the north of Retail Row and southeast of Dirty Docks.

The second purple coin is around a hill located near Pleasant Park. Leave the landmark from its northeast entrance and run for the hills to find the second purple XP coin.

The only gold coin on the map can be found inside the clocktower in Salty Towers. Since there aren’t any stairs that go up, you’ll need to enter the tower from above. This means that you should probably land here first after leaving the battle bus. Land on top of the clocktower and start pickaxing your way down to find the coin.

You can potentially try building your way up as well, but it’ll take considerably longer to do so.

"I swore in front of thousands of children and still got a skin": Lazarbeam talks about having his own skin in Fortnite - Sportskeeda

Fortnite And PUBG Do Not Make Good Esports

Common Fortnite Mistakes That You Should Avoid at All Costs