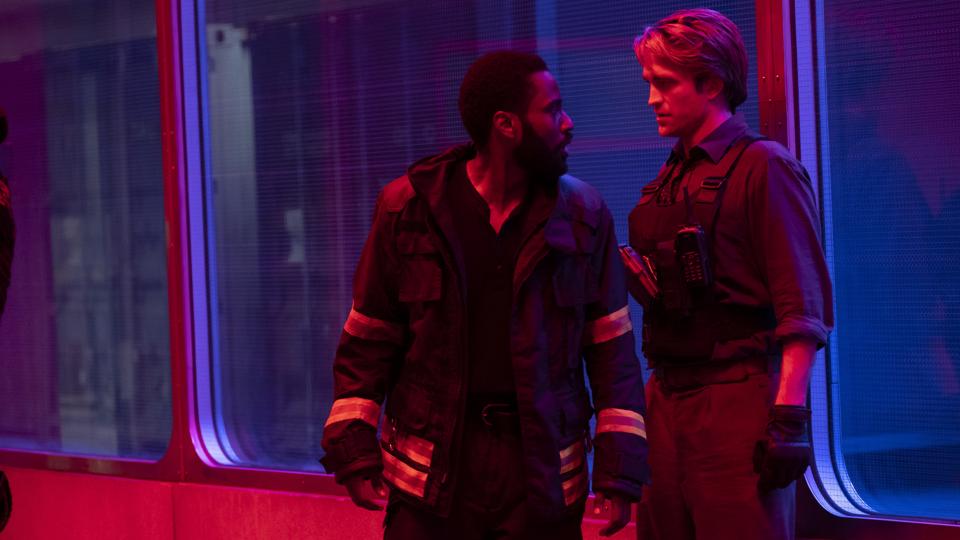 As you know by now, the new trailer for Chris Nolan’s Tenet debuted last night to generally positive notices. The trailer offered a bit more plot, clarified the whole “not time travel but time inversion” talking point and promised that the film would be coming to theaters, as if that was ever in doubt. Curiously, the trailer (nor the new poster) offered no confirmation about the release date, even while Warner Bros.’ YouTube page still claimed that the film was set for July 17, 2020. But the oddest thing about the trailer was the manner in which it debuted. If you wanted to see it before anyone else, before it popped up online several minutes after the fact, you had to play Fortnite.

Moreover, you had to let your avatar walk on over to an area literally called “the big screen,” where the trailer was projected on a giant screen. The notion of the new trailer for Chris Nolan’s new movie premiering within a video game and in essentially a second-screen setting, whereby the trailer was projected on an “in game” movie screen and was somewhat obstructed by characters and elements of the game was cosmic irony and/or knowing humor. It would appear that Nolan took pronouncements about premiering the trailer on the big screen a bit literally. He got to debut his Tenet trailer on “the big screen,” even if it meant debuting the preview during a video game and with Mystery Science Theater-style obstructions.

Sure, we grouchy old people complained about having to get our children to get help us see the trailer, and yes, my eight-year-old had to have his avatar race to the proper location, but it was something unique and frankly a smart way to drum up buzz. First, it showed up the 170-second (!) preview to exactly the kind of demographically-friendly audiences who would otherwise be intrigued by the John David Washington/Robert Pattinson “time inversion” espionage thriller.  According to a 2018 Common Sense Media survey, 61% of U.S. teens have played the game. As of May 2018, Fortnite was the most watched game on Twitch and YouTube Gaming. And its demographics were a whopping 72% male and 61% 18-24.

That does seem like a prime demo who might enjoy a run-and-gun PG-13 action spectacular. Heck, 98% of the players are (on average) between 18 and 44, which is near-identical to the core 18-49 demographic advertisers most value. I discussed on Sunday that one issue with marketing Tenet in a world where Tenet would be the first major Hollywood movie after months of theater closures would be a lack of big blockbuster movies on which to attach the trailer. That’s still an issue, but there’s likely at least some overlap between folks who play Fortnite and folks who might have otherwise seen the trailer prior to showings of No Time to Die, Black Widow, F9, Wonder Woman 1984 and/or Top Gun: Maverick.

Had life not been upended by coronavirus, it’s likely that this trailer would have either debuted in theaters attached to one of the aforementioned summer movies or during a major sporting event. Last year’s NBA playoff season began in mid-April with the NBA Final games concluding in mid-June. Any number of major commercials and trailers for the first batch of big summer movies likely would have used those games for a launch pad. And moves slated for late July, early August and beyond would have used the Summer Olympics (July 23-August 8 on Comcast

CMCSA
-owned networks and platforms) had they taken place as scheduled. But absent live sporting events, operational theaters and much in the way of “event TV,” Fortnite debut was the best available option.

Warner Bros. used the popular video game platform for the same reason Disney debuts Star Wars trailers during football games. While much of the online media is about preaching to the converted, TV spots, theatrical trailers and the like are about reaching folks who may not be aware of the movie but may be interested if informed. Moreover, using Fortnite as a trailer launch pad generated additional publicity due to the unusual nature of its debut. This wasn’t during a basketball game, a morning talk show, a late-night talk show or big TV show, it was during an online multiplayer run-and-gun video game. Using this specific avenue allowed the Tenet trailer to gobble up even more online chatter beyond just “Hey, here’s a trailer.”

I can’t speak to viewership numbers within the video game, but I wouldn’t be shocked if Fortnite becomes a standard place to launch (stereotypically) guy-friendly action movies at least until theaters and televised sports return. I’d like to think Chris Nolan was entirely aware of both the method of how this trailer would be released and the means by which it would be viewed within the game itself. It was hilarious to see a new Chris Nolan trailer playing on an in-world “second screen” movie screen while characters and items in a video game partially obscured that screen. Heck, when you consider moviegoers causing similar distractions in a multiplex, maybe this was the closest approximation to seeing the Tenet trailer “on the big screen.”

Fortnite Shadow Safe Houses: Where to Go To Beat Those Storms in The Agency Challenges

Lazarbeam survives for over one hour in a Fortnite match

Top free mobile games that you can try on your phone: From PUBG, Fortnite, Call of Duty: Mobile

Own your own 17.5′ inflatable Fortnite Battle Bus / Boing Boing